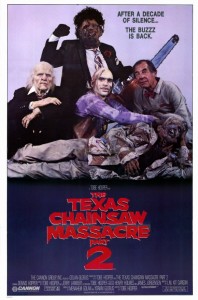 “After a decade of silence… the buzzz is back.”

Dire-logue: “You got one choice, boy: Sex or the saw.”

I’m not a fan of the old Texas Chainsaw movies by any measure. The original manages to be both over and under rated simultaneously but I don’t particularly care if I ever see it again.

Keep your pitchforks and torches at bay until I get around to reviewing it. For now, let us focus on the sequel…

The first half of this VERY 80s movie is great stuff. Charismatic Texan DJ Stretch (Williams) overhears the chainsaw-slaying of two snotty frat boys during her radio show and volunteers to assist vengeful ranger ‘Lefty’ Enright (Hopper), uncle of Sally – sole survivor of the original massacre. In Texas. Involving a chainsaw.

Thirteen years on, Lefty is hell bent on tracking down those responsible. Meanwhile, those responsible – Leatherface and kin are hiding out beneath an abandoned amusement park, where they make ‘the best meat in the state’ under the cute name of the Sawyers.

Leatherface and hyper-sibling Chop-Top are dispatched to kill Stretch after she broadcasts the recording of the frat murder over the airwaves. Instead of being sawn to ribbons and served up in a burger shack, Stretch manages to win Leatherface’s affections and he lets her live. She follows them back to their lair, where she is captured and tortured while Lefty begins destroying the place.

Differences between this and the original are sharp: Where the old film traded on its almost documentary-style feel, TCM2 hinges itself on dark humour and visual surrealism, recreating the infamous dinner scene before the climax. Not to mention the Breakfast Club-esque poster artwork.

It’s less of a slasher film – possibly as a reaction to the over-saturation of the genre it helped create – than a bizarre nightmare set to celluloid.

Johnson stands in for Gunnar Hansen as Leatherface and the Tom Savini grue effects work is great, especially the scalping opener. When original submitted to the BBFC for a rating, they came back requesting as much as 25 minutes of cuts! It was eventually released unscissored in 2001.

Hopper and Williams are good, although all characterisation goes out of the window at the halfway point, which swivels from the great first half to an annoyingly indulgent latter section.

About as entertaining as the first one but in a vastly different way and nicely made by its helmsman so worth a look at least once.

Blurbs-of-interest: Caroline Williams was later in Stepfather II and Hatchet III. Bill Moseley can also be found in Blood Night: The Legend of Mary Hatchet, Home Sick and Silent Night Deadly Night III. Tobe Hooper also directed The Funhouse, and the 2003 remake of The Toolbox Murders.