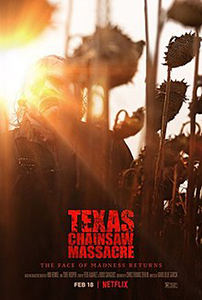 “The face of madness returns.”

A friend asked me what horror film I was watching next. “Texas Chainsaw Massacre“, said I. “The old one?” I took a breath to answer, then had to stop as I tried to unravel what film this new one was. 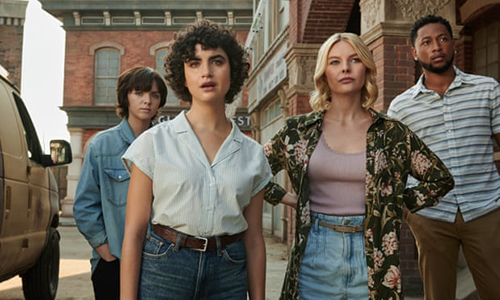 Shooting began in Bulgaria in 2020 but the original director was turfed out, his footage scrapped entirely, and replaced by David Blue Garcia. A planned big-screen release was called off and the film ended up debuting on Netflix to a tidal wave of “worst film ever!!1!” criticism, primarily for its heavy pilfering from the 2018 Halloween requel.

Despite this less than promising start in life, TCM ’22 is an unrelenting 81-minute rapid-fire gorefest, spending about twenty minutes conjuring up the set-up: A quartet of city Gen-Z types arrive in the ghost town of Harlow, Texas, which they’ve …bought? (“Gentrifuckers!” complains a local). In the wake of their self-driving Tesla will be a coach of young entrepreneurs, with a view to turning the place into a mecca of artisan bakeries, restaurants, and art galleries for city life ex-patriots. Oddly, a similar subject was touched on in 2021’s Candyman re-whatever. 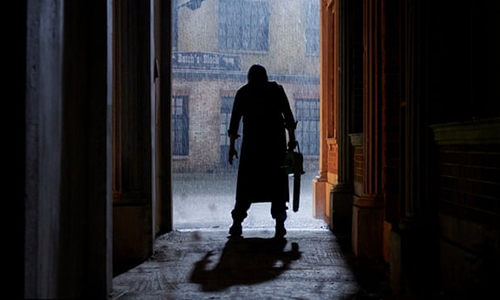 Upon arrival, they discover the sole remaining residents – an infirm orphanage owner and her last charge, a hulking figure who hangs back in the shadows: I think we can all guess who that is. A dispute over her right to be there results in her having a heart attack and being carted off by the sheriff. Mystery-companion goes along, as well as one of the newcomers. When the old woman expires in the back of the van, he flips, kills the deputy and causes the van to crash in a field.

In what is probably the film’s best scene, the surviving passenger Ruth (Nell Hudson), witnesses the wackadoo remove the face from the dead lady and don it for himself. She plays dead when he investigates his mess, and tries to track him through the wing mirrors while contemplating her escape.

Back in town, the bus of investors rolls in, occupying the attention of lead …town …buyers (?) Dante and Melody. Melody’s younger sister Lila, a survivor of a school shooting, doesn’t want to be there and goes off exploring on her own. Upon hearing that the old lady has died, grizzled local contractor Richter confiscates the car and bus keys until Melody and Dante can prove they legally own the orphanage, and didn’t just kick the poor woman out, causing her death. They look for certificate in the house, coinciding with the return of Leatherface, who makes quick work of Dante, while Melody hides from him.

A storm sets in and the investors take their party back aboard the bus while Melody is accosted in a tense scene, culminating in a sewage pipe being cut open and leaking on to her head. Saved by Lila, the sisters race back to the bus and a scene that rivals the raft moment from The Burning ensues as Leatherface clambers aboard – and the Gen-Z’s raise their phones and threaten to cancel him.

What unfolds pretty much sums up the franchise’s title: A good 15-20 people are buzzed to pieces by the world’s most fuel-economic chainsaw, with just Melody and Lila able to escape through a skylight. As they scramble for escape, in rolls a truck and out climbs Sally Hardesty – survivor from the original, who has been waiting for almost fifty years to face down Leatherface. Like Laurie. She brings a shotgun and a ‘fuck it’ attitude. Like Laurie. She stalks him back to the orphanage, ordering him to ‘say her name’, under some illusion that after a couple of hours with her half a century earlier, he’d have any idea who she even is. I imagined he was way too busy trying to work out which timeline he’s in.

Ultimately, Sally flops and she’s chainsawed to fuck before being able to be of much help to the girls, who then go through the standard motions to the end, with the suspiciously insensitive caveat of Lila having to use the very thing she fears – a gun – to defend herself. The NRA presents the Texas Chainsaw Massacre?

Early whiplash reviews were overwhelmingly negative, crammed with the usual “IT’S WOKE!!1!” accusations. But is it? The hipster-esque characters are all portrayed as negative stereotypes, with the redneck white guy turning out to be something of an almost-hero, all the non-white characters meeting grisly ends… If anything, the film goes all out to satirise so-called ‘woke tropes’. Much of this is enabled by strange attempts at comedy peppered throughout, the threat of cancellation met with instant death-by-powertool could not possibly underscore this any more powerfully – and yet, thick people everywhere continue to whine that progressive propaganda is being forced down their throats. A grisly last-second shock is lashed to a gag with the Tesla, is almost slapstick, giving the whole thing a gory cartoon value.

Let’s just ignore the fact that all-powerful, nimble Leatherface must be, minimum, in his late sixties.

There’s a lot wrong with it, but it somehow manages in spite of itself, with nice photography and some familiar but effective sequences in the first half.

tagged with get your own ideas!, gore o'clock, requel, sequel city, slasher, spoilers, what the hell!?