Not quite Star Trek, is it? 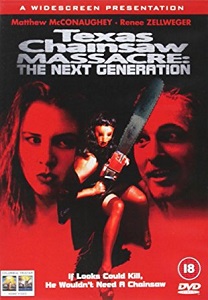 TEXAS CHAINSAW MASSACRE: THE NEXT GENERATION

“Still buzzin’ after all these years.”

Laughter Lines: “What if we get into a wreck and crash the car and we all died? They could write a song about it.”

Of the main body count franchises, Texas Chainsaw Massacre likely ranks my least favourite, aided to no end by this much despised fourth outing, which was intended by Kim Henkel as the ‘true sequel’ to the 1974 original.

Things start out okay with four high schoolers crashing their car on a back road on the night of their prom and end up as spare meat for a psychotic family who dwell deep in the woods. The clan is led by unhinged truck driver Vilmer (McConaughey) and his trashy girlfriend, Darla, while Leatherface spends most of the film in drag, like a bad cabaret show at a provincial gay bar. I’ve seen a few of these and can attest the likeness.

There are plenty of harks back to the original, which serve only to remind us how much more raw it was, as the junky action clunks along with horrendous continuity problems, and portrayals of psychosis that rival the drag angle in terms of high camp.

The quartet of teens are allotted little in terms of characterisation, bar dowdy final girl Jenny (Zellweger). Both actors ascended to levels of stardom far removed from this low-end flick, which was later recalled by Zellweger as being so cheaply made the actors shared a single trailer that belonged to a member of the crew. However, there’s no escaping your humble beginnings, and the fact that agencies attempted to sue the production company for reissuing this with the stars as the focus probably only brought more attention to it in the long run. Though without their subsequent good fortune, would it be remembered at all?

tagged with before they were famous, gore o'clock, sequel city, slasher, slasher films that aren't supposed to be funny but are funny, who finances this crap!?, yo! Hollywood