*According to me. Me, me, me! So don’t be surprised to discover some classics are missing. 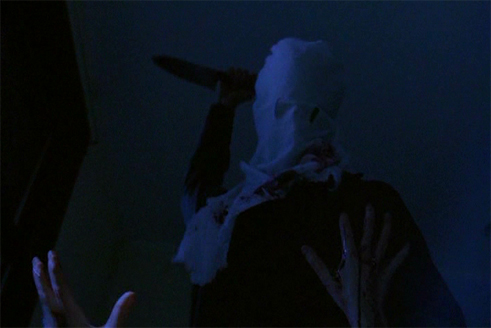 Slow, brooding, and with a low body count. Normally the stuff I hate in a slasher film, but Stevan Mena pulls off a minor miracle here: The Bodycount Art Film. A botched bank robbery sends a gang of criminals and their mother/daughter hostages to a dilapidated farmhouse inhabited by a bag-masked psycho who may or may not be the local boy who disappeared in the 80s. Tsuyoshi Kimoto’s pristine photography paints a bleak Americana and is the brightest jewel on display. Forget the shoddy prequel, Bereavement though.

Crowning moment: One of the fugitives goes to ‘look around’ outside the house. In the dark. Alone. Behind her, we see the killer lurking in the peripherals. Pure stalker stuff and excellently done. 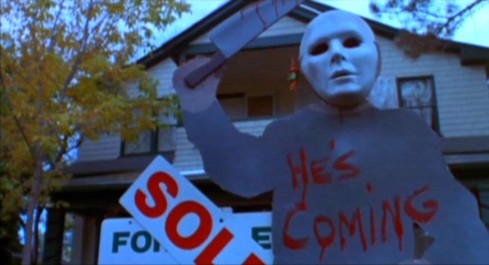 Likely an unpopular addition, this Halloween sequel was one of the first I saw and, while it was hampered by production nightmares, it holds together quite well, and captures the ‘Hallowe’en atmos’ better than all of those that’ve followed. Michael Myers reappears in Haddonfield six years after disappearing with his niece, who has just had a baby, and now he wants it back and will kill all who stand in his way, including pre-stardom Paul Rudd, as the grown-up Tommy Wallace.

Crowning moment: “There’s someone else in the room! He’s right behind you!” 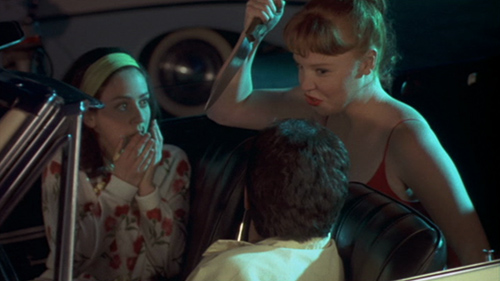 A screen adaptation of a campy stage musical (!), Lauren Ambrose is a plucky 50s teenager with multiple personalities who just wants to surf with all the hunky beach boys. But who is murdering folks with varied impairments? The surf kids, a B-movie actress, and a strangely butch female police chief are all trying to find out. One of those slashers-on-the-side affairs adorned with some recognisable faces.

Crowning moment: The Lu’au dance-off that makes the choreography of Grease look second-rate. 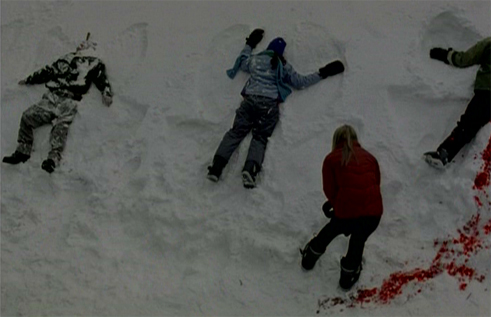 Teenagers staying at a cabin on an out-of-bounds mountain are done in by a snowboarder-hating killer. While Iced may have been there and done that, Shredder is a cute, relentlessly likeable little slice of paradise, stocked with interesting characters who you, for a post-2000 film, surprisingly don’t hate.

Crowning moment: The recurring gag of a hanged snowboarder going around and around on the chairlift all day. 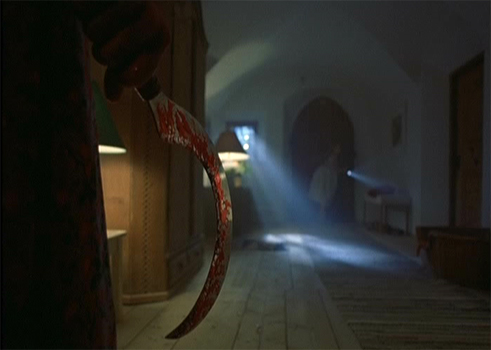 Germany’s response to Scream is a ludicrous farce that is inexplicably awesome at the same time. As a young girl, Jeanette witnessed the brutal slaying of her parents (and dog) by a dress-wearing maniac. X years later, she lands a job teaching French to a trio of rich siblings while their parents are away and the killings soon begin again. While things don’t necessarily tie together come the reveal, and the dubbing on the DVD is horrific, Flashback contains enough carnage to make Jason proud. Though I can’t say I’m a fan of all the domestic pet slashery.

Crowning moment: The ‘past event’ trauma (pictured), the camera keeps with that sickle as the killer moves in on young Jeanette as she tries to reach the key suspended on a hook above the door. 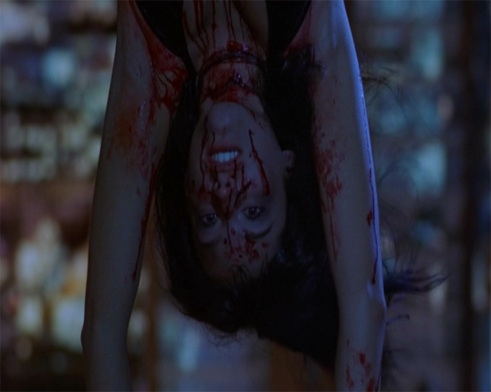 College students majoring in criminology are being stalked and slain by a lunatic recreating the murders of Jack the Ripper, right down to the placing of each and every stab wound. About halfway through it turns stupid (they decide going to a cabin in the woods is the best course of action) and the ending is clouded by ambiguity – in accord with the real life crimes – but Ripper can at least boast polished production, gruesome slayings (including Kelly Brook, above), and decent acting, even if it does grind on for nearly two hours.

Crowning moment: Though Jack the Ripper never killed anybody that way, a couple tumble on to a log saw conveyor they cannot escape from and look doomed to plunge face first into twin buzz saws. 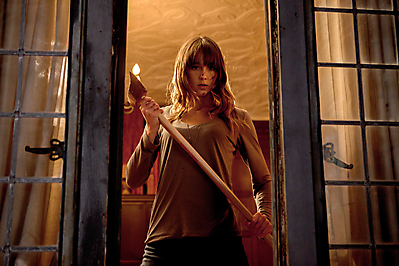 Home invasion movies were briefly ‘a thing’ and they don’t come with much more ballistic action than You’re Next: A family reunion (again, in a house in the middle of nowhere) is crashed by a team of masked assassins and the besieged Davison clan have to do all they can not to die. What neither they, nor the killers, counted on was one of the guest’s innate survivalist training…

Crowning moment: I saw this at a horror festival and the blender-on-the-head moment got the biggest cheer for a reason. 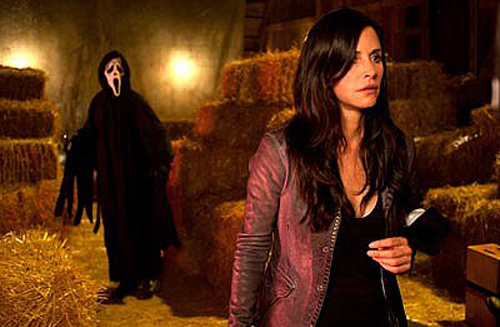 Arquette, Campbell, and Cox were all back to check in with Woodsboro a decade after the events of Scream 3: Sidney is in town promoting her self-help book, while Gale is trying to write one, and teenagers around town are falling victim to a new Ghostface-clad killer who is well-versed on the remake and reboot culture of Hollywood. The pairing of Williamson and Craven elicited mixed reviews – due mainly to the slack middle third – but the self-awareness is fully intact and the blood free-flowing.

Crowning moment: The pre-title slaughter, arguably defined by Scream and copied by everyone else, now reclaimed with chucklesome flair. 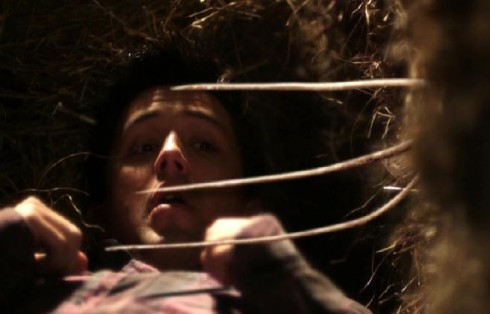 I’ve long held the view that if you carefully selected the best parts of other slasher films and sewed them together, you’d have one awesome film: Mask Maker is it. College kids renovating an old farmhouse accidentally resurrect the undead psychopath who once dwelled there and has a penchant for slicing off people’s faces and wearing them over his own deformed features. Almost every scene is a recreation of moments from every killer-with-a-blade pic since Psycho but done very well.

Crowning moment: Final girl Jen steps into the heroine’s shoes with veritable gusto and gives the killer a real run for his money. 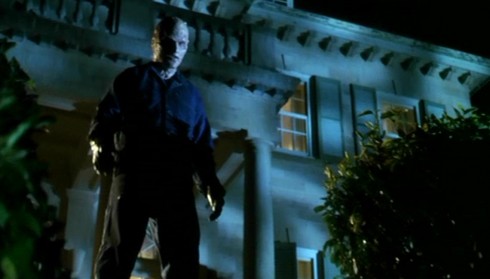 As Flashback was Germany’s answer to Scream, so Cut is Australia’s. Seems that anyone who tries to complete cheesy unfinished slasher flick Hot Blooded ends up dead. But this urban myth doesn’t stop a team of film students from hiring Molly Ringwald’s bratty actress and giving it the old college try. Expectedly, the curse strikes again and the film crew are soon being laid to waste by a wackadoo dressed as the on-screen killer. Dry Aussie humour failed to resonate for most and the film has an unfairly bad reputation.