Having done this for Friday the 13th some while ago, it’s now Freddy’s turn (then Michael, don’t get panicky). So mirror mirror on the wall, who’s the awesome-est of them all…?

Of course, Freddy is the best character in the franchise, but that’s predictable, so he – like Jason and Mrs Voorhees in the previous countdown – won’t feature here. 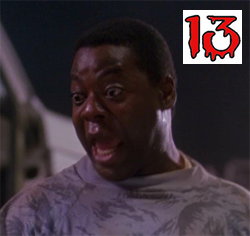 “Big tough bad ass” Kincaid says motherfucker a lot and tells a fellow ward inmates in Elm Street 3 that’s he’ll outlast them all – and he’s nearly right. Breaking the ‘black guys always die first’ trope in that film, he is one of three survivors, only to die first in the next film! Given with one hand, taken away with the other. Whatever, he’s proof that Elm Street was a franchise toying with the usual conventions: In any other 80s slasher film, he’d have likely been done in. 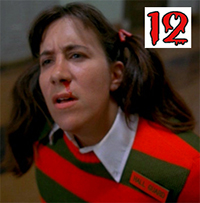 Who is this girl? Is she even real? Why would she buy that sweater? I like her bunches. Hall Monitor girl only appears for a few precious seconds but she’s awesome for each of them, and she leads in Nancy’s excellent line: “Screw your pass!” 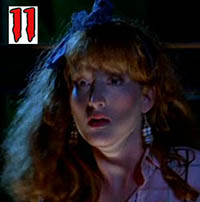 Proto-Tiffany suburban high school queen Lisa (Kim Myers) has a bit of a Streep look to her, don’tcha think? While balancing popularity n’ stuff, Lisa befriends and attempts to heterosexualise new boy Jesse, who is being tormented by ‘the monster who wants to come out of him’ – Freddy. Only a kiss from Lisa can save the day! 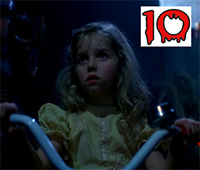 Irrespective of whether or not he was a kiddie-fiddler, Krueger murdered children before he was killed, and in turn, they crop up in the dreams of the Last of the Elm Street Children, such as this sweet little blonde girl, who says cryptic and spooky things to Patricia Arquette as she runs through a scary dream. Creepy Child is probably the best of the Creepy Children. 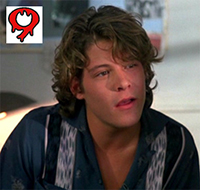 Sensible Phil is possibly the most intelligent of the psyche ward kids in Elm Street 3, he makes a valid point to the doctors, which they ignore. But his predilection for sleep walking and puppet-craft is capitlised upon by Freddy, who turns him into a human marionette, using his veins for strings, and then drops him off the top of a tower. 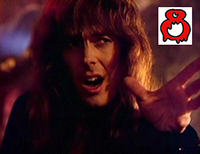 Elm Street stans should doubtlessly be familiar with the high camp video for the title song Dream Warriors, by spandex metal band Dokken, who, in the said video, save Patricia Arquette and defeat Freddy with the high-pitched squealings and frankly amazing facial expressions of lead vocalist Don Dokken. If you’ve not seen it, go to YouTube this very minute! 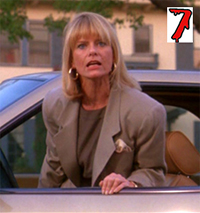 Kristen’s socialite mom first turns up in Dream Warriors, but comes back for more in the fourth movie, where she’s even more outrageously overbearing and hilarious. A real symbol of the cruelty of Freddy: the guilty adults are (usually) allowed to live and suffer the deaths of their children for their crime. Played by Brooke Bundy, mother of Tiffany Helm, the supreme Violet from Friday the 13th Part V, this still is my favourite Elaine moment: “Kristen! Get away from that house! Andale!” 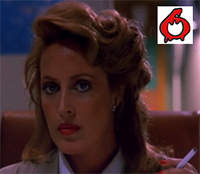 From one guilty mama to another, Nancy’s alcoholic mom is one of the most camptastic characters in horror history. The first adult to finally cave in and ‘fess up to what they all did to Freddy Krueger, this only happens after Nancy’s friends start dropping like flies and Nancy begins telling mom uncanny details about her recurring dreams… Plus she smokes in a hospital. Rebel. 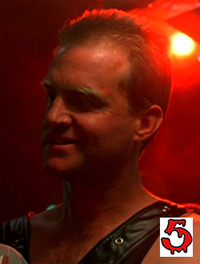 Nasty, pervy, gum-chewin’ high school gym teacher Schneider (Marshall Bell) likes to punish the twinks in his classes, and takes a particular liking/dislike to Jesse, Freddy’s chosen conduit for carnage in Elm Street 2. The psychosexual undercurrent operating in the film has Jesse ‘coincidentally’ end up in some odd S&M bar ordering a drink, only to be caught by leather harness-wearing Schneider, who takes him back to school for a midnight detention, where he is bound, whipped, and slashed to death just as the shower heads spurt foamy water in the most unsubtle reference to ejaculation you could hope to find… 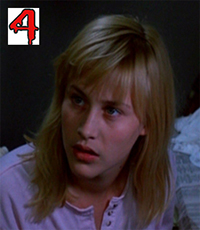 Although she returns for the next film, Patricia Arquette is the definitive Kristen, the successor to Nancy’s mantle who has the power to suck other sleeping people into one combined dream, thus allowing them to team up against Freddy. Tuesday Knight did a good job of carrying on the torch (Arquette was pregnant and couldn’t return). Best moment: Flipping out at Dr Simms, “You stupid bitch! You’re killing us!” 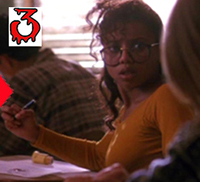 Sweet nerdy Sheila is, like Debbie, on the periphery of the nightmare-plagued group in Elm Street 4, not really that concerned with the deaths of the friends-of-a-friend until weepy heroine Alice inherits Kristen’s dream-suck power (ooh-err) and practically serves her up to Freddy, who, ahem, “sucks” her to death during a science exam. Her Janet Jackson-lite vibe and oversized glasses make her the type of final girl I’d prefer for a change… 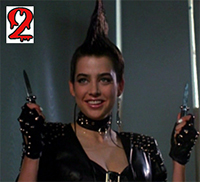 Recovering junkie Taryn is “beautiful and bad” in her dreams. Alas, that’s not enough to save her from Freddy, though she does put up a good fight before succumbing to his modified finger knives: Druggie filled needles . Fortunately for actress Jennifer Rubin, she got to don the heroine role in the following year’s Bad Dreams, in which she plays a girl who is stalked in her slumber by a psycho who wants to kill her. Uhh… 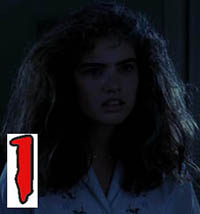 Well, it should surprise nobody really that Freddy’s ultimate nemesis is the numero uno non-undead character from the series. From her humble beginnnings as nightmare-plagued teenager with exponentially big, dry hair, to leading the Dream Warriors, and then even coming back as Heather Langenkamp for the fourth-wall busting New Nightmare. Nancy, you’re the best!

So nobody from The Dream Child, Freddy’s Dead, New Nightmare (excluding Heather, sort of), Freddy vs Jason or the remake make the cut. Quelle surprise.

And it’s certainly all girl power isn’t it? C’mon guys, Glenn almost made it, but Dr Gordon/Rick/Dan etc? Zzzzzz. The chicks certainly rule this dream.

tagged with one two Freddy's coming for you..., spunky final girl, the 80s