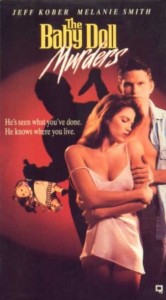 “He’s seen what you’ve done. He knows where you live.”

Dire-logue: “With a serial killer there’s always a pattern: he hates his mother; he hates his father; all women are whores. Something!”

Insomnia-busting late night TV cops versus serial killer thriller, in which a troll-faced Kober is the detective chasing an anonymous maniac who, in turn, chases down a string of women and leaves plastic baby dolls at each murder scene.

Some familiar stalk n’ slash ciphers appear throughout while Kober and co-worker / squeeze have a lot of sex in a jacuzzi. Surprising only the cast members, the dolls are significant only in that each victim had an abortion from the same doctor and, naturally, a couple of Kober’s relatives are on the hit list. Hey, we haven’t cast a chief yet, wheel out John Saxon!

The resolve lacks anything that comes within 100 yards of suspense, with a laughable histrionic speech from the obv killer. In filmular terms, it’s not 100% redundant, just so painfully boring. Worth it only if you have a strange obsession with seeing all of Saxon’s cop roles, otherwise el steero clearo!

Blurbs-of-interest: DiCicco was in Maniac Cop 3; Eileen Seeley was in both Jack Frost films; Saxon played a cop or similar in Elm Streets 1, 3 and 7, Black Christmas, Tenebrae and Welcome to Spring Break.

tagged with slasher, TV, who finances this crap!?