Kincaid lives!!! …for a few minutes 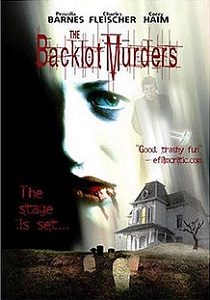 THE BACK LOT MURDERS

Laughter Lines: “You have assets: Use your ass and your sets.”

This production is a mess, but it’s an occasionally entertaining mess with some amusing lines – largely courtesy of Charles Fleischer as the put-upon director – and an interesting backdrop for the carnage to take place against. Mild spoilers ensue.

Your off-the-shelf horror movie rock band are about to hit it big and are shooting their debut video on a Hollywood studio back lot where The Lost World: Jurassic Park was filmed. Six months earlier, they fired their temperamental songwriter after he smashed a bottle over a barmaid’s head – will that have any bearing on what’s to come?

Also on set is the lead singer’s bimbo girlfriend Janey, whose father runs the label they’ve signed to, and bitchy PR woman Stephanie, who wants the video to be cutting edge – so much that she’s willing to cut a few other things in order to see that goal realised? 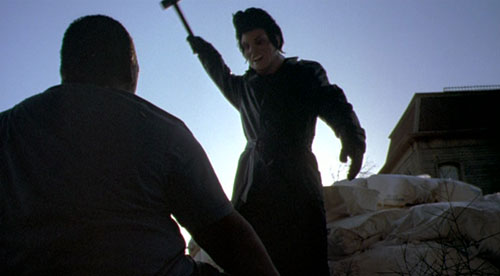 Well somebody seems hell bent on making it a video to remember, starting with a couple of special effects folks (this is one slasher flick where the black guy – Sagoes who was Kincaid in two mid-Elm Street sequels – does die first – ironically he first to die in The Dream Master as well!), and filming each slaying by camcorder.

As numbers dwindle, highly-strung, campy director Henry deals with an endless parade of morons trying to get on screen: “Wow you’re an actress? In Los Angeles? How unusual.” But the rest of the film is expanded by long dull scenes of couples exploring buildings and the Elvis-masked killer not showing up soon enough. As usual, the scantily clad babes all flash their boobs before being chased away after their boyfriend is stabbed in the back.

Dim-witted Janey is somehow nominated to be the heroine, despite the film offering up a couple of other viable options earlier on (Henry’s assistant, who I think survives by leaving, and Wendy the fog lady), leaving us without a strong heroine figure to root for, just about the only remaining girl not to take her top off. 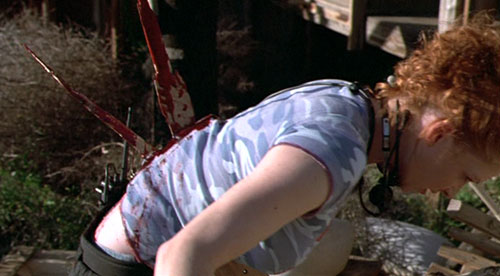 The late Corey Haim’s comparable bit-part would go unnoticed if you – like me – didn’t recognise him. Barnes, however, is great in her sub-Betsy Palmer turn. Despite the curiosity of the Psycho house and a few other set pieces, this is one production probably better left in the lot – especially if you happen to watch the DVD featurette where the director claims it’s a “thinking man’s horror movie”. Right.

Blurbs-of-interest: Barnes was in Stepfather III; Fleischer was the dream doctor in the original Elm Street and was also in Chain Letter.

tagged with after they were famous, Nu-di-ty, obvious identity of killer, slasher, spoilers, star power, yo! Hollywood