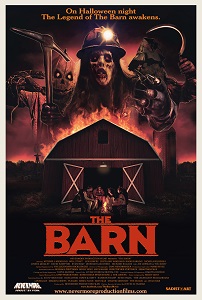 “On Halloween night the legend of The Barn awakens.”

Laughter Lines: “I watched them eat a fucking face-burger made out of Russ’s head!”

A labor of love by creator Justin Seaman, whose vision was so strong that even when the film ran out of cash, most of the cast and crew stayed on to see it to completion.

The ‘lost 80s’ subset has given us the likes of The Sleeper, Lost After Dark, Lake Nowhere, and of course The House of the Devil in the last few years as well as probably a barrel load more of films I’ve just not seen. Some of the capture the era perfectly, some pile on the Rubik’s Cubes, day-glo, slang, and Cyndi Lauper hits to eyebrow-raising proportions. Eyebrows being apt, they always give it away. Nobody was that preened in ’81.

The Barn is (wisely?) set in 1989, allowing for hairstyles and technology to look a little bit more likely than some of the other examples. For Halloween-obsessed nerd Sam, following the traditional rules of Trick or Treating is a vital life skill, even if it means he’s mocked for being too old to care by his dad and others when the season rolls around.

For pranking uptight local Ms Barnhart (Linnea in cameo), Sam is tasked with gathering candy for the church. Or something. I wasn’t clear on the nature of this punishment, but he and his friends decide to attend a concert by Demonic Inferno and pick up candy in a town along the way. They end up in Wheary Falls, where, in the 1959-set prologue, a pre-teen copped a pick-axe in her head after knocking on the door of an old barn. Sam knows the legend, which shapes his trad. views on the subject, but when the six teens pound on the door of the same barn, they awaken a trio of Halloweenie demons who soon canter into town to gather ‘treats’ for their master.

After wasting a couple of Sam’s friends, the trio – pumpkin-headed Hallowed Jack, the Candy Corn Scarecrow, and The Boogeyman, who is a Satanic miner – off a few townsfolk before crashing a party and slash their way through everyone. Everyone.

Sam and his pal Josh learn from a ’59 witness what they have to do and by when, and head back to the barn to destroy the three demons and prevent the devil from ascending for his All Hallow’s Eve feast.

The Barn isn’t strictly a slasher film, despite cruising close to those waters, its ’89 setting ties it in with the cross-genre films that came along at the end of the decade, tossing in ideas and motifs from various other horror sub-genres for a melting pot effect. The grainy picture and cigarette burns don’t necessarily convince me that films from [the real] 1989 were presented this way, harking back to the two films it brought to mind most clearly: HauntedWeen and Jack-O (the latter filmed in ’93 but aesthetically similar and with Linnea). 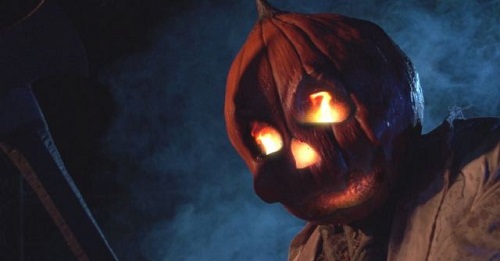 The colorful playfulness and attention to detail is the main selling point here, buoying out some flat characterisations and a crucial lack of final girl-dom come the end, which flirts with a Bill & Ted-ish bro scenario. This is the kind of film you have vague memories of seeing at your friend’s house as a kid and want to randomly find on a cable channel around Halloween years later, crack a few beers and smile ear to ear for 90 minutes.