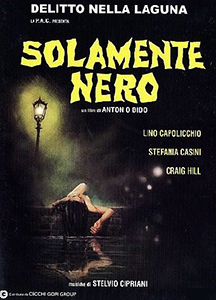 Laughter Lines: “I’m beginning to be frightened again – take me away from here!”

Imagine this as a kind of feature length pilot of Italian Murder, She Wrote, with Capolicchio as a Professor taking time out of his hectic life in Rome to visit his big brother, a priest on one of the small islands off Venice, where a school girl’s murder years earlier remains unsolved.

On his first night there, big-bro witnesses a murder occur outside his window and begins to receive threatening letters from the apparent killer. The victim, a self-professed medium, and her small group of regulars, including a Count who habitually forces himself upon young boys, a nurse providing illegal abortions, and – gasp! – an atheist doctor, are the ones to find themselves hunted down by the black-gloved, face-never-on-screen killer. 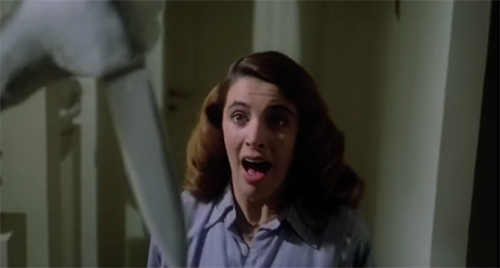 Prof. – who looks just like Howard from The Big Bang Theory – joins forces with artist Sandra, who has a painting that ‘speaks to him’ and finds herself caught up in the drama. Together, they go boating, have sex, and talk about paintings a lot. Meanwhile, the Count gets run through with an antique sword, and the threatening notes keep arriving at the church.

Clocking in just shy of two hours, The Bloodstained Shadow grinds on quite relentlessly, but there are some good scenes – the canal murder-by-boat is inventive, and there are some proto-slasher POV stalking sequences to crank the tension, but throw Angela Lansbury into the mix and this could pass for another trip for Jessica Fletcher to visit her nephew’s cousin’s college roommate’s aunt’s dogsitter and become embroiled in a murder. But you’ll probably clock the killer within the first twenty minutes.

Watch out for the world’s only jump scare-by-accordion.