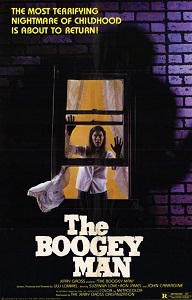 “The most terrifying nightmare of childhood is about to return!”

This weird as fuck film, and resident of the British Video Nasty list, begins with a westward steadicam pan to reveal a white house while a piano tinkers. For a second, you might well think you’re watching Halloween instead, but as the camera floats closer, you realise it’s one of the first of a zillion rip-offs.

Two small children watch at the window as their mom gets it on with a guy in a wifebeater who wears a stocking over his head like any garden variety rapist. She shoos the children away and the wifebeater guy ties the boy to his bed. While mom and wifebeater get it on, a child’s hand grabs a big knife and we float down the corridor with it in shot. But it’s the little sister, come to cut her brother free. Of course, big bro then takes the knife and stabs wifebeater to death with it. Credits please.

Twenty years later (never nineteen, never twenty-one), the siblings Lacey and Willy live with their aunt at her farm. Lacey is married with a sprog, but Willy is mute and brimming with trauma still. When they receive a letter from Mom asking to see them one more time, Lacey goes a bit mental and her husband carts her off to the shrink, John Carradine (who shot all his scenes in one day). Doc suggests that she go back to the house where it happened for closure.

This has all taken a long boring time to happen, so something good needs to happen soon, Boogey Man, or you’re going to look as boring as your 2005 namesake.

Mercifully, it does. Touring the house with the permission of the three young siblings living there, Lacey finds that the bedroom where the murder happened has the same mirror on the wall and, in the film’s only genuinely creepy moment, she can see wifebeater man in the reflection, stocking still over his face, watching her back… sitting up… getting of the bed… coming for her… 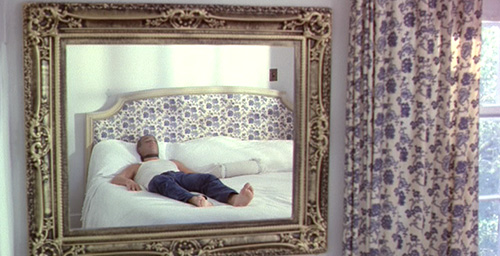 What’s scarier – the ghost or that vile curtain?

So she smashes the mirror with a chair.

While this is probably what most of us would’ve done too, unbeknownst to Lacey, the mirror is now cursed and various splinters and shards of it contain the eeeeevil of THE BOOGEY MAN! Who is he though? Wifebeater dude? No one ever explains.

After they leave with the remains of the mirror, a piece of the glass left behind on the carpet glows and throbs and the invisible killer stalks the three siblings, making one of the girls stab herself in the neck with scissors (after cutting open her top, perv!), slams the window down on her annoying little brother, and I can’t remember what happened to the other girl. Obviously nothing interesting. 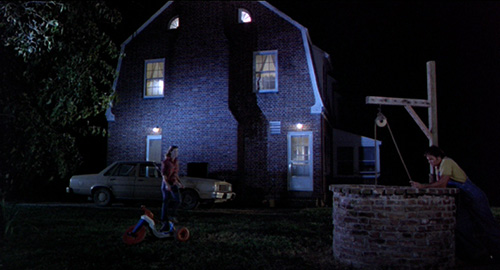 Back at the house – the fucking Amityville house! – weird things begin to happen. Willy is all freaked out by the mirror, and little bits of it fall off here and there. One piece gets stuck to Lacey’s son’s shoe so that when they go fishing later, the sun bounces off it across the water to a quartet of sexy teens having a picnic on the other shore. Mucho POV work occurs as the Boogeyman invisibly stalks and kills a couple of them in an amusing, proto-Final Destination way.

Lacey is attacked by the invisible man, who rips her clothes, and husband guy finally agrees that shit ain’t right, but by then it’s too late for the aunt and uncle and a priest is summond to the house in a sloppy Exorcist finale with a crucifix, lots of bleeding, and the mirror eventually being lobbed down a well – AS IF THAT’LL STOP IT! 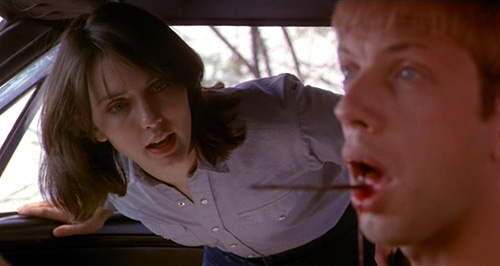 Everyone and their grandma knows that shards of it will survive for the inevitable sequels, neither of which I’ve seen, but have sub-2.0 ratings on IMDb and one, or possibly both, is chiefly made up of footage from this film, a la Silent Night Deadly Night Part 2.

Despite it’s ornate weirdness, unsatisfying end and Halloween pilfering, The Boogey Man at least tried to approach the genre from another perspective with the supernatural element shoehorned into proceedings, rather than another guy in a mask. Parts of it work, other parts fail harder than a Donald Trump spellchecker.

This is one film that actually would benefit from a remake, perhaps incorporating themes of the similarly-plotted Oculus. 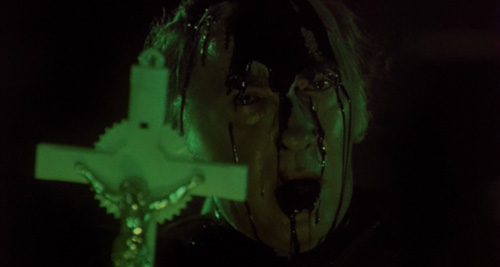 Blurbs-of-interest: Suzanne Love and Lommel (married at the time) returned for the first sequel; Nicholas Love was in Fatal Games; John Carradine was in Silent Night Bloody Night.

tagged with get your own ideas!, Nu-di-ty, slasher, slasher films that aren't supposed to be funny but are funny, star power, the 80s