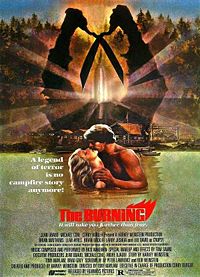 Don’t you love that title? Say it aloud in a booming movie voice: “The BURRRR-NING!” Say it to your friends! Get them saying it! We’ll start a chant!

1981 is the year as far as slasher movie saturation is concerned. Halloween and Friday the 13th had set the rules, Prom Night and Terror Train had proved there was profit to be made by following the same template. Plenty of other films had returned the goods in the interim, some of them shamelessly ripping off their forerunners. Rumour has it that a couple of budget production companies were vying for the rights to the so-called ‘Cropsy Legend’, a summer camp tale to roast marshmallows to. The winning bid eventually came from a group of individuals who would later found Miramax – Bob and Harvey Weinstein. The other production later became Madman.

So, it’s a summer camp slasher movie then… Been there, seen that. Twice in as many years, in fact. Still, all is not lost. The Burning goes for the jugular, almost literally. By design, it seems, it was purely intended to push the bar in terms of bloodshed as far as it would go.

As usual, things kick off with a past-event trauma that sees summer camp janitor Cropsy turn from litter picker and hedge trimmer to teen-picker-offer and finger-trimmer; he’s accidentally set alight when a juvenile prank goes awry. Five years later, he’s finally released from hospital, hideously scarred (and for the time being, unseen), and more than a little angry at all things summer campy, teenagey, and fun. Kinda like your common or garden grandparent.

The Burning forces itself in a few different directions to its most obvious inspiration. There aren’t just horny teen counsellors at Camp Stonewater, no siree, it’s in full swing with proper campers. Because of this, the characterisations are quite interesting, with cliques and pranks galore. There are a couple of sexy girls, the boys who chase them, the requisite bully, the gorky kids, some skinny, some fat, some speaking with strong accents and there’s Alfred. Alfred (above right) is the nerd who nobody likes, doesn’t want to be there, but likes to perv on the girls. Here, The Burning plays around with our expectations, leading us to believing that we’ve met and bonded with our final girl – then the bastards kill her off first!

Cropsy has returned, conveniently right after his story was told around the campfire and he’s got a big pair of pruning shears to hack, slash and skewer those who have taken leave from the safety of the main camp for a couple of nights in sleeping bags. One camper down, when dawn comes and the counsellors – Todd and Michelle – discover her absence, they’re also informed that all of the canoes have mysteriously floated away as well… Five campers are elected to paddle back to camp on a makeshift raft to fetch assistance. Needless to say, they don’t make it. What occurs is easily among the most notorious slasher movie demises ever. The rickety raft comes upon a lone canoe and, attempting to retrieve it, find it’s occupied by Cropsy, who offs all five of them in thirty seconds flat.

The first time I saw The Burning I was not expecting this and nearly fell off my chair in shock at the uber-violence on display – and that was a cut version! Seriously, it’s pretty intense, even if the effects – Tom Savini’s – look a little ropey here and there. Bones are hacked, torsos stabbed and a young Fisher Stevens’ fingers are cut back to stumps. It’s gross. Really gross. Bleeeccchhh!!11!1!1!!!

After some respite, some Brandy and some crack, I felt composed enough to return to the film. Counsellors Todd and Michelle are a bit worried about the raft’s apparent disappearance while nasty bully Glazer finally gets his way with sexy Sally, unwisely beyond screaming distance from the rest of the campers. Now, slasher films ain’t particularly intelligent at the best of times but a nice touch in the script of The Burning is that the sex between Glazer and Sally is bad. She tells him as much, he apologises, she says OK and agrees to go again. It’s when he runs off for a condom that Cropsy puts in an appearance, shiny shears in hand… 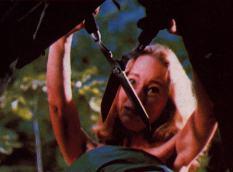 While Sally is last seen trying to hold off the shears of DEATH, Glazer is followed back towards her by the ever-curious Alfred, for reasons unknown – maybe he woke with morning glory and wanted to see what the fuss was about.

Instead of observing some spank bank material, Alfred watches while Glazer tries to wake a ‘sleeping’ Sally and gets those garden tools of doom right through the neck and is hoisted up and pinned to a nearby tree (below). Nice retribution for the camp asshole. 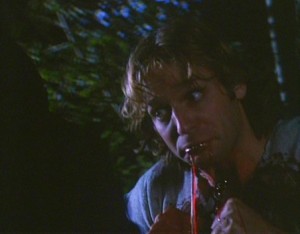 Alfred summons Todd who is duly clipped by the shears and rendered unconscious while Crospy goes for Alfred, resulting in a rather protracted and tedious chase through the woods to some random delapidated building in the middle of nowhere.

Elsewhere, the raft-of-salvation floats lazily back to the remaining campers who soon find it’s still got bits of their dead friends attached to it. Todd returns, hoping Alfred made it to safety, to witness the gruesome discovery and convince Michelle and the surviving campers – now traumatised beyond help in their pink dungarees and long socks – to use the raft-of-death to paddle back to camp for help.

Alfred is captured and trapped by Cropsy, who baits Todd into the gloominess of the inexplicably situated mine-thing for the big flamethrower-featuring showdown, where we get a look at the extent of the killer’s toasting and it transpires, flashback stylee, that Todd was one of the teens who caused THE BURNING (…use that voice again). After a struggle, Alfred frees himself and stabs Cropsy with his own shears, allowing Todd to embed an axe in his skull, resulting in a big spray of blood from his mouth.

The make-up for Cropsy is far beyond ridiculous. You might say he’d never be released from hospital in the first place, but, hey, this is the realm of the slasher movie and it’ll do what it wants. Things end with a new batch of campers hearing the story around the fire. Sequel? Nah, nobody’d survive that axe.

The Burning got cropped of most of its elaborate gore effects by the time it was released in the summer of ’81, incidentally one week after the startlingly similar Friday the 13th Part 2 was unleashed. Friday is far better and it’s sad to learn that Savini turned down that for this, but his work is the most intriguing thing about this little timekiller, which not only also features Jason Alexander – with a full head of hair, no less! – but also future Oscar-grabber Holly Hunter, both as campers, the latter with only about two lines of dialogue. If you can’t spot her, she’s Sophie, the one who shouts “hey Todd!” a moment before the raft-of-death discovery. 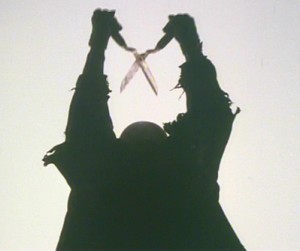 So why only a three-star rating? The Burning is distinctly lacking in something that makes the first two Fridays such great genre examples. Make no mistake, it’s a good film, one of the goriest on the list and surprisingly thoughtful at times. Perhaps it’s just too obvious that its primary concern is to make the audience cringe rather than root for the survivors? Or the Final Boy thing, which is a case of ‘Nice try…but no.’ There’s a cruel streak running through proceedings, borderline misogynistic, with the first camp victim singled out for a particularly spiteful demise, not to mention the luckless hooker who invites Cropsy upstairs after his release. Bizarrely, those responsible for his chargrilled condition were all boys… Maybe a kick-ass heroine would’ve bandaged some of these wounds. These minor complaints aside, it’s still essential viewing for genre aficionados.

**Edit** – I skimmed the DVD again and upped it to three-and-a-half stars, soft touch that I am.

It was finally released uncut on DVD in the UK in 2002 and the US in 2007, previously missing nine seconds of footage from various murder scenes.

tagged with before they were famous, gore o'clock, Nu-di-ty, slasher, star power, summer camp, the 80s