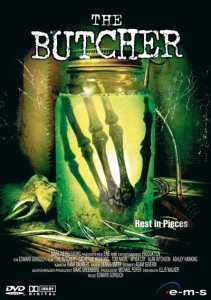 Dire-logue: “Leave her – she’s dead now, she’ll be dead when we get back.”

When road trips go bad… Don’t they always? Even if you don’t run afoul of hillside cannibals, motels run by transvestite mama’s boys or rusty old tankers hell bent on running you off the road, the people you’re stuck in the car with will inevitably piss you off and make you wish for any of these distractions, as will local radio and the dull scenery that tumbles by.

In this instance, six teenagers on their way to Las Vegas to celebrate their graduation take the short cut from hell and, whilst fooling around, have an accident that kills one of them: they hit a tree while one of the girls is dancing out of the sunroof. Needless to say, they end up calling on the local malformed psycho’s house for aid.

This no-budget second-gen photocopy of Wrong Turn is competently enough put together and has a handful of decent, likeable characters as well as traces of what could have been a nightmarish sequence of events had it been in more professional hands or in possession of more moolah but it ultimately moves too slowly and looks too cheap to leave a lasting impression.

It also has a mean streak with all black or gay characters meeting particularly nasty ends at the hands of the truck-driving loon but this kind of minimalist approach is usually pretty effective, it just leaves very little to say about it.

Blurbs-of-interest: Catherine Wreford was in the similar (and slightly better) Wrestlemaniac; Tom Nagel was in Jolly Roger: Massacre at Cutter’s Cove and directed ClownTown.

tagged with get your own ideas!, rip-off central, slasher, slasher films that aren't supposed to be funny but are funny