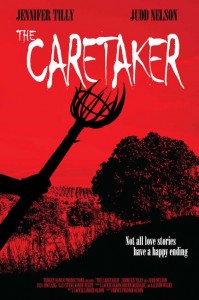 “Not all love stories have a happy ending.”

The Zone Horror channel has given me the opportunity to see quite a few slasher films since I first had access to it about a year ago. Plenty of these films are bad – The Gingerdead Man, Crazy Eights – and some have been pleasant surprises – StagKnight, Pray for Morning. The Caretaker lands somewhere inbetween. It’s one of those instantly forgettable B-movies populated by fresh faced, enthusiastic thespians and a couple of has-beens signed on for the pay-cheque…

Here, Jennifer Tilly and Judd Nelson graduate from their 80’s teen roles to being “the adults” – namely a nympho teacher with a penchant for low-cut tops and a concerned father of the obvious final girl respectively. Elsewhere, Jonathan Breck (The Creeper from Jeepers Creepers) has a limited, but effective role as a questionable limo driver taking three teen boys and their dates to an abandoned house at a grapefruit grove (orchard?) where an old legend about a psychotic caretaker who kept his beautiful wife shackled in their house, then murdered her family and eventually her when she tried to leg it with their newborn daughter. 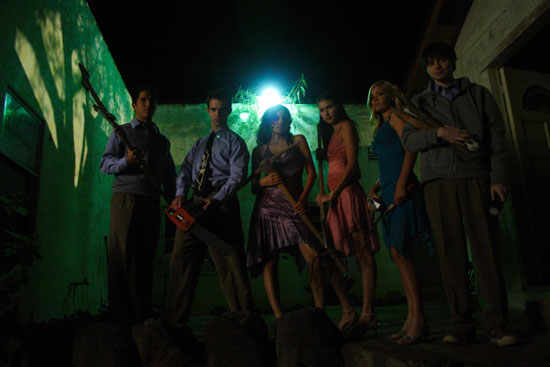 In a sort of diet-Hell Night evolution, it turns out those sent to make scary noises from outside have already been murdered and now those inside are to fall victim to the disguised killer, who uses a tweaked fruit picker to skewer everyone to death. One girl says she is bored by everything and opts to walk back to town – and survives! Another girl – in her prom dress – attempts to take off on a quad bike before she is clothes-lined off of it. There’s also fruit-picker to the dick, grapefruit asphyxiation and an overdose of juvenile fart-gag humour. Squeaky Tilly plays it charismatically, further cementing my theory that she and Cyndi Lauper are in fact the same person.

The outcome is pointedly obvious when you make a quick reckie of Judd Nelson’s overall screentime and the number of years between the past murders, all equating to a resolution that’s about as difficult to establish as a three-brick Lego set. Tame, passable teen horror for a boring evening you don’t mind forgetting about.

Blurbs-of-interest: Breck later played the loon in Mask Maker. Jennifer Tilly was in 1989’s Far From Home and several of the Child’s Play films (and TV series) as Tiffany; Will Stiles was also in Circle.

tagged with after they were famous, get your own ideas!, Nu-di-ty, slasher