Suffer (because of) the little children 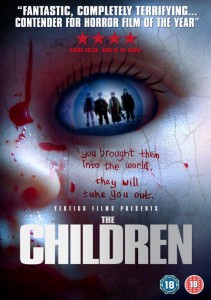 “You brought them into the world. They will take you out.”

Dire-logue: Casey – “Have you ever heard of feminism?” Jonah – “Has it got anything to do with self-absorbed lazing around?”

Those of us who don’t have children can’t always understand the behaviours of those who do, it’s more evident if your brothers and sisters have kids. They become over-sensitive to their surroundings, potential influences and would happily see you burnt at the stake before admitting their offspring was the one who actually scribbled all over the wallpaper.

In Tom Shankland’s entirely chilling story, two ‘picture perfect’ families gather to ring in New Year’s at a secluded mock-tudor neo-mansion in a snowy December. Elaine and Jonah have brought their kids Miranda and autistic Paulie, as well as Elaine’s teen daughter Casey to her sister Chloe (bit of a showy bitch) and brother-in-law Robbie’s place, where they want to home school their Kodak-kids Nicky and Leah. It’s all catalogue-shine and barely contained quips as the sisters try to out-Mom each other to prove who’s best, while Jonah chisels away at Robbie in the hope of an investment for importing some Chinese herbs or something, and Casey just wants to be able to use her phone. 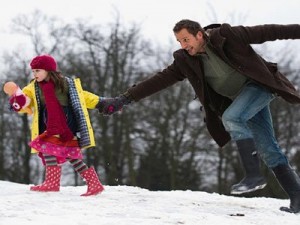 The little kids, all under 10, are acting a bit weird. They feel sick and we see that there are icky, multiplying germs around them. The joyous facade begins to fall apart at the seams when the family cat vanishes and the kids all go haywire over lunch, soon escalating into the death of hunky dad Robbie in what’s been made to look like a sledging accident but is anything but! Chloe goes ape and Casey begins to suspect the children as they fail to emote, unless their crying and whining is to trick the next schmuck into wandering into their trap!

The Children has a bold sense of grit – common in British horror – and doesn’t shy away from showing its criticism of modern ‘over-parenting’ as some of the adults simply won’t accept their kids are anything but angelic cherubs from heaven and would rather blame anything or anyone else for the unfolding terror, namely Casey. It also doesn’t shy away from the deaths of the kids at the hands of their parents as self defence becomes the only option (though why they don’t just knock them out with a golf club and lock them away, I’m not sure). (Some of) the children are killed quite mercilessly, the kind of thing you just don’t see on your TV! It’s a brave step, one that would sink a film of a larger, starrier proportions, but as a micro-budgeted indie flick, who’s gonna notice?

Definitely not one to show pregnant cousin Sally or those X4-driving Mums outside school, they’re likely to get more violent than anything shown on screen at the mere suggestion of killer kids getting killed back! Shankland, who directed W Delta Z (Waz), is a talented helmer, making great use of the sparse landscape and doe-eyed psychopaths as they glare at their doomed makers. It’s slash that doesn’t really adhere to being slash but still kinda is, albeit with a 28 Days Later type creepy ending. Additional points for the presence of bona fide eye-candy Sheffield.