THE CLOWN AT MIDNIGHT 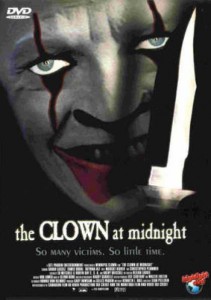 “So many victims, so little time.”

Dire-logue: “Once you go down there I have a feeling we won’t be seeing you again.”

This grandiose slice of cheddar hails from Canada, not famous enough for its quite sterling record when it comes to quality slasher flicks. Sad to say that’s not the case here…

A group of off-the-shelf high schoolers are helping out their drama teacher Margot Kidder (in a role that accounts for all of ten minutes’ screen time) to restore an old opera house that’s been closed since the leading diva was moidered by her jealous lover. “Coincidentally,” one of the group happens to be the daughter of said murder victim and spends most of her time brooding about it.

What this made-for-video combo of Stagefright and Scream 2 comes down to is a cash-in blag on the success of the films it’s aping. This said, there are some fairly decent aspects at play: it’s certainly well produced with some adventurous photography creeping in here and there – along with the boom – but ultimately suffers from exaggerated ‘token’ characters who’re given dreadful lines: “Ashley carries a cellular in her bag,” “Thank God for technology.” They’re all here in full force: the bitchy girl, her jock boyfriend, sassy black girl, misunderstood rebel… Disappointingly, the kooky girl who thinks it’s all paranormal (“spirits don’t hurt people, not in anything I’ve ever read!”) and the gay kid are offed with much prejudice. 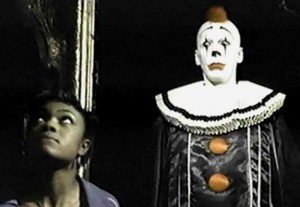 Then there’s the killer, dressed up in full clown garb as was the killer of Opera Diva Lady in the prologue. But his presence doesn’t stop another character dressing up in exactly the same make-up to frighten Tatyana Ali’s sassy girl. Whatever happened to Tatyana, I wonder? Well here, she goes all Jada Pinkett and dies with an expression appears to cross constipation with childbirth. The fiend’s identity isn’t even worth trying to figure out, it’s so damn obvious. Given the ‘past event trauma’, there’s barely anyone to choose from as a likely suspect. Chalk this one up with the hoards of other video flicks of the late 90s.

Blurbs-of-interest: scribe Hall wrote Terror Night (a.k.a. Bloody Movie); Margot Kidder played Barb in the original, and therefore perfect, Black Christmas; James Duval was in May; Ryan Bittle was in Devil in the Flesh.