With Groupie down I turned my attention to The Collector, as sent to me by the folks at Lovefilm. Now, I wasn’t sure if I’d even count this as a slasher film for much of the running time but I guess it adheres enough to the general opus, even if I’m totally against seeing animals killed on film. Disapprovingly, while it’s a pretty good flick, I’ve not a lot to say about it… 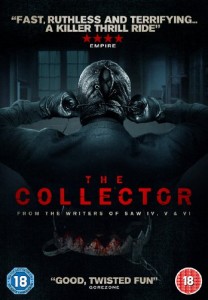 “He always takes one.”

Heavily debted ex-con Arkin works honestly by day in construction and moonlights as a thief. When working on the home of a rich jeweller and his family – who are about to go away for a few days – Arkin sees an opportunity to meet the deadline of a loan shark and sneaks into the house after hours to break into the safe.

Unfortunately, not only does it seem that somebody else is in the house, but said somebody has the family captive and is intent on torturing them to death, thwarting any escape attempts with numerous well-thought-out traps around the place. Yes, it’s Home Alone by Jigsaw.

What ensues for a while is a tense game out cat and mouse between Arkin and the hooded killer – The Collector – until the kind-hearted thief decides to try and help the family, if no one else than their pre-teen daughter Hannah, who is hiding somewhere, with whom he struck up a rapport earlier in the day.

Naturally, the killer’s pre-set traps are all used and all of them work exactly as they should, to squish, skewer, snap and slash the family members, a boyfriend and anybody else who happens by. Nothing is shown that is not used in some way and when the killer is more hands-on, luck is always on his side when spinning a blade at some more schmuck. But there is success in the potrayal of the killer – he’s a genuinely unsettling fellow with eyes that, when caught at the right angle, glow green like when you take a picture of your dog. He has no particular motive and it’s not even clear what his purpose is, to kill or ‘just’ torture?

It would be hypocritical to denounce a film for being too brutal when you make a habit of watching and blogging about them but The Collector, like some of the scenes in, say, Hostel: Part II, goes further than what I’d find entertaining. Gruesome ways to kill people – fine, this does share some production credits with the Saw franchise – but the prolonged suffering of people and animals isn’t where I want to get my kicks and, like it or not, there are people who get off to that kinda stuff, it’s a losing argument to say otherwise.

Adam Green made the point at FrightFest that horror fans are often viewed as weird or sick in some way prior to the premiere of Hatchet II but comparing the cartoon violence of that film to a domestic cat pretty much melting into an acidic composite is pointless – you can laugh at the stupidity of Victor Crowley taking out two burly guys with a phallic chainsaw but at recreations of genuine pain – blecch. Even the quote from Gorezone on the front is worrying: “Good, twisted fun.” Good and tense as parts of The Collector were, there was absolutely nothing fun about it.

One final weird thing was the presence of Madeline Zima as the teenage daughter, Jill. She played the little girl in the a fore mentioned The Hand That Rocks the Cradle. In the same way Danielle Harris grew up from her little kid role in the Halloween sequels to go topless in Rob Zombie’s remake, it feels a bit perverse to see Zima disrobed here, able to remember clearly her squawking “you’re not my Mommy!” at Rebecca DeMornay what feels like only a few years back…

This will NOT end well…

Some pro’s: Stewart is a good, charismatic lead and Marcus Dunstan directs more than competently, creating a decent amount of tension in the opening sequence that poses some questions that may or may not be totally answered.

I’d say The Collector is more of an experience than a piece of escapist horror like a Friday the 13th sequel. Pushing the boundaries has been key to the success of several recent entries in the is-it/isn’t-it torture porn sub-set but even just a hint of a happy ending might’ve made this one more bearable. Let’s see some ass-kicking of the psycho rather than cowering and shrieking victims. What little it does give you isn’t enough to satisfy the counter balance that makes your more regular slasher flick a fun viewing experience – the bit where the final girl turns the tables. Yeah, I said I’d finished ranting already. OK, cut.