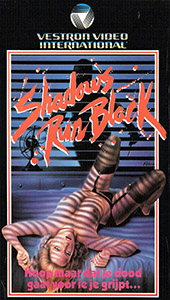 “Turn around slowly because…”

Beware those films where actors and crew overlap!

Had it not been for the burgeoning stardom of a one-scene bit-parter, it’s questionable whether Shadows Run Black would have ever seen the light of day after its initial run (if it even had one).

Crappy though this slasher-detective hybrid is, I found my copy for £1 and sold it to some crazy German Costner-phile for £18.

A ski-masked killer is doing in girls who share a history of drug-dabbling. His next target is the pretty, though wholly unconvincing, Judy, whose older brother hates her black boyfriend Billy (played by the associate producer and sporting a fantastic Village People handlebar moustache). Big brother’s wife is also screwing around with another guy. Sucks to be him.

Sucks even more to the viewer. From the entirely obvious identity of the killer to the fact that every on-screen female victim gets naked – and STAYS naked to walk around the house, investigating strange noises.

Fervent misogyny and beyond-shit production quality team up to drag this sucker further downhill, through some bushes, into a ravine, and down a sinkhole, after an okay opening slaying.

Costner is a red-herring cowboy, barely recognisable in his appearance, his name suspiciously absent from the end credits, which appear to be manually typed on to the screen by some frantic intern, reaching the end of the line and slamming enter in time with the dismal score.

But it’s still better than The Postman.

tagged with before they were famous, get your own ideas!, Nu-di-ty, obvious identity of killer, the 80s, who finances this crap!?