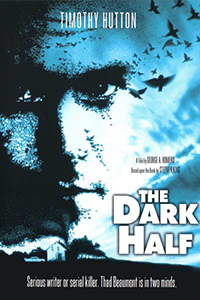 Given that Stephen King wrote the book, Night of the Living Dead creator George A. Romero directed it, and it’s almost two hours long, this is a strangely uninvolving venture, shot in 1991 and released two years later due to financial problems with the studio.

King adaptations are difficult creatures to grasp – for every Carrie or Misery there’s a Sleepwalkers or Maximum Overdrive (which a coked-out King directed himself) - so it’s kind of neither here nor there that The Dark Half vanishes between the extremes: Not a bad film, but not a particularly interesting one either.

As a kid, Thad Beaumont suffers from strange episodes where he hears sparrows. Doctors later find evidence of a twin absorbed in utero - there’s an icky scene where a blind eye opens up inside his exposed brain. Once removed, Thad grows up to be a struggling author – been there, bud – on the verge of a breakthrough and, in the meantime, teaching creative writing students about allowing that darker self through in their work. 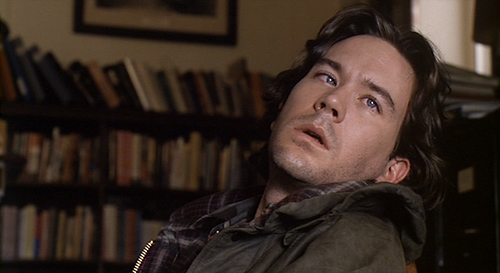 Thad is soon blackmailed by a shady guy who has found out that he’s been writing low end, high selling trash novels under the nom de plume George Stark. His agents advise him to own it and a publicity stunt is staged where he and loyal wife, Liz, mock-bury Stark in a local cemetery – and that’s where the horror begins.

First to go is the publicity stunt photographer, who is beaten to death with his own prosthetic leg, then the blackmailer is found dead… Local Sheriff Alan Pangborn informs Thad that his fingerprints are found at the scenes, but how can he be in two places at once? Schizo-Haute Tension shenanigans going down? Or is George Stark real somehow? And what’s with the sparrows?

I’m not sure as to Stephen King’s opinions on slasher movies, but I wouldn’t think they were particularly favourable, but the elements at work in The Dark Half do verge into that territory, with ‘George’ continuing to off people important to Thad, agents, interviewers, cops assigned to protective duty, and the doctor who backfills the story about the twin-that-never-was… The usual luckless schmucks really. There is a scene later with some psychobabble that attempts to make sense of it, providing Thad with his possible out, and giving Stark time to abduct Liz and the kids. 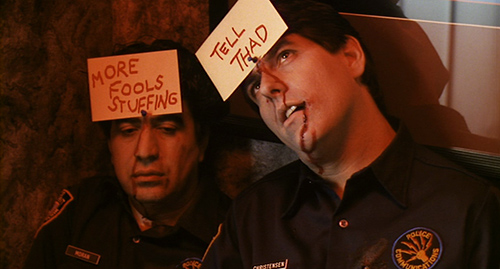 The sparrows eventually come to help out in a Birds-esque scene, that’s pretty inventive, but I just never felt particularly attached to anybody’s plight. Hutton, apparently difficult to work with on set, just doesn’t seem to care a great deal about the fates of his friends and colleagues, and even his infant twins seem like they might just be expendable. On the plus side, I was glad that things didn’t turn out to just be all in his head, and the higher-end production gloss helps, but I never need to see it again.

Blurbs-of-interest: Timothy Hutton was later in #Horror; Michael Rooker was in Skeleton Man; Rutanya Alda was also in Girls Nite Out and You Better Watch Out; Beth Grant was the mean teacher in Child’s Play 2; Julie Harris was in Home for the Holidays.