The film that dripped cred (through its gaping plot holes) 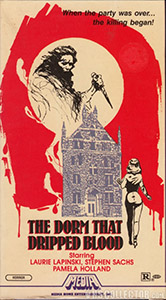 THE DORM THAT DRIPPED BLOOD

“When the kidding stops, the killing starts.”

Dire-logue: “Don’t you undestand? It’s been me the whole time – I’m the one!”

Shot for $90,000 over a series of weekends, this cut-price effort from the end of the first teen-slasher boom inexplicably found itself on the notorious ‘Video Nasties’ list back in the 80s, until someone came to their senses, realised how tame it was and released it, albeit with 10 seconds of footage cut.

A quartet of college students belonging to a co-operative volunteer to stick around for a couple of weeks to shut down Morgan Meadows Hall before it’s to be demolished. Not a surprise given how ugly the building is. A fifth – Daphne Zuniga in her first screen role – helps out for a day before her folks come to pick her up, but she and they are murdered by the off-camera loon who is stalking the dorms. 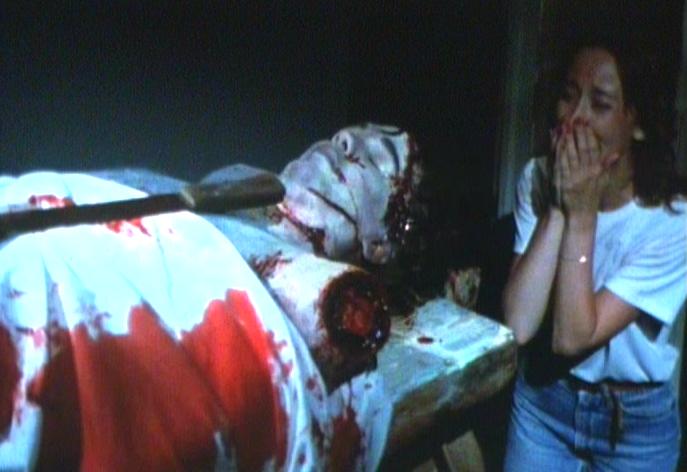 Suspicion falls on a frizzy-haired red herring who appears at windows and picks items out of dumpsters, but he isn’t fooling anyone, we know it’s someone else altogether.

Furnished with a real off-putting twist that leaves a sour aftertaste, the film is effectively ruined by its own smugness. Up until this point, it’s just another parade of endless cliches: people saying “I’ll be right back”, phones cut, power out, lots of wandering about in the dark, and really, really boring dialogue between the terminally boring characters.

The killer, once revealed, claims to have done it all for the love of Joanne, whose boyfriend went skiing at the beginning of the film. Why kill someone who is vacating anyway and not bother killing the boyfriend? This is one of those films where you wish someone would ask why and get a valid answer – it literally makes no sense. But then, the kid is a loon, what did we expect? 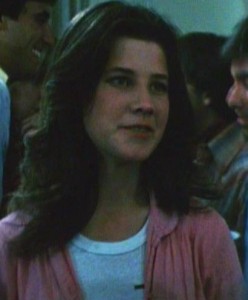 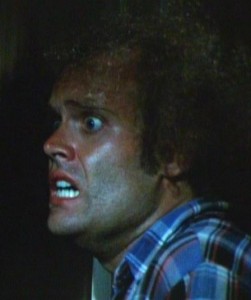 A few minor thrills towards the end and just about acceptable production merits (excluding much of the atrocious acting) make this one worth ticking off a completist’s list but it’s certainly nothing more.

Blurbs-of-interest: Zuniga ‘graduated’ to final girl status a couple of years later in the far superior The Initiation; Stephen Carpenter directed weird horror movie Soul Survivors in 2001. The one with Casey Affleck, Wes Bentley and Eliza Dushku and a crappy, insulting twist. Anyone spot a trend?

tagged with before they were famous, death on campus, Nu-di-ty, slasher, slasher films that aren't supposed to be funny but are funny, the 80s, weird-ass twist, what the hell!?