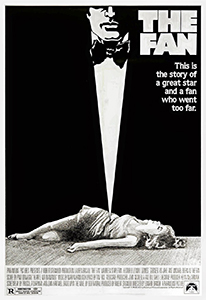 “The final act is murder.”

Fandom can be a dangerous thing: From annoying fan tribes who crowbar whatever artist they’re presently fixated on into every available conversation or Tweet, hijacking any and all news items to remind you how much they love X, to the genuinely frightening fanatics whose love turns deadly.

The Fan came out in May 1981, less than six months after John Lennon was shot and killed by a fan, although it had been in production since the spring of 1980 and was based on a 1977 novel. Naturally, this led to a critical backlash of some degree, in part due to the increased violence in cinema issues present in the era of a-slasher-movie-a-week.

While The Fan has more in common with the late-80s Fatal Attraction-style high-end thrillers than your common or garden Friday the 13th also-ran, it walks long enough in the territory more commonly occupied by stab-and-drip movies to be included here. Bacall is once-huge actress Sally Ross, now approaching 50 and about to debut in a broadway musical. For some time she’s been receiving letters from devoted fan Douglas Breen (Biehn), which become more and more demanding when only Sally’s secretary Belle (Stapleton) replies and upsets him by referring to him as a member of the fan club rather than, well, whatever he considers himself to be. 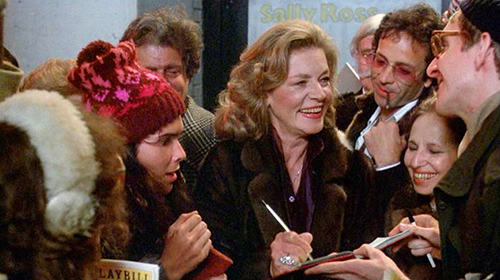 Doug’s fantasy life steps on the feet of his job, which he loses for speaking out against a ‘lazy’ co-worker (played by a young Dana Delany), and he imagines himself to be Sally’s lover – sending a graphic letter detailing just how he will pleasure her, and demanding she reprimand the secretary for her behaviour.

Still no closer to Sally, Doug decides to take disciplinary proceedings into his own hands and slashes Belle in a frenzied attack, blaming this on Sally for not replying personally to him. He then attacks another friend of hers by razoring him down the torso in a pool, again blaming Sally, and eventually forcing her to flee New York for her own safety when the next – which occurs in her own home against her housekeeper – turns fatal. 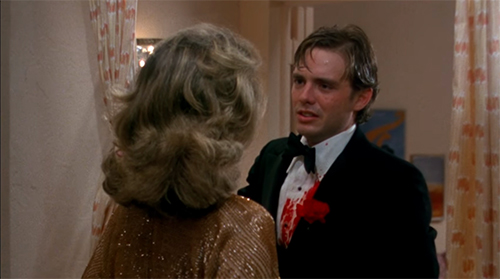 The Fan takes an interesting turn at this point, as Douglas wanders into a gay bar and picks up a young guy for a quick hook-up. While ultimately it’s part of a ruse to fake his own death thus luring Sally back out of hiding, it offers up some questions about the type of character we’re dealing with. It’s not a stretch to imagine an over-the-hill female star of musicals being idolized by a gay male, and Doug’s earlier letters promising sexual fulfilment could nod towards a self-loathing, mom-obsessed Norman Bates-type affair. But it’s also problematic, a kind of dis-ownership in deference to blaming any one other than a straight guy for this type of behaviour – homophobia in 1980s America one year after Cruising!?

Anyway, things end after the opening night of Sally’s musical (which was pretty shoddy), when Douglas stabs a couple of hangers-on to get her alone in the theater and finally confronts her. Again, The Fan toys with us a little: Sally doesn’t shriek, she merely faces down her stalker and is able to take advantage of his starstruck position to sashay away. This angers him and he attacks her, but still Sally shows little surface-level fear, instead mocking him and reminding him she doesn’t know him, buying her the time she needs to strike back. A very engaging and diverting ‘final girl’ scene if ever there was, aided by Bacall’s significantly more vast array of acting chop than most twenty-something starlets cast as the heroine. Indeed, the top drawer casting here shows what a huge difference players who can act has on a horror film. 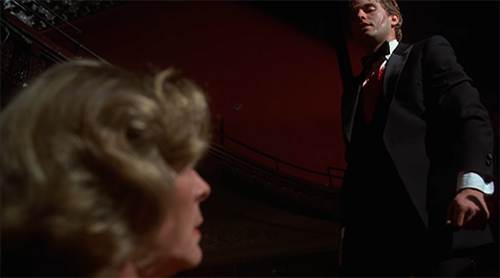 Even as I typed up this review, on Twitter someone was using hashtags about a plane crash in Asia to talk up K-pop boyband BTS, which illustrates that we haven’t really come so far in almost 40 years, with ‘stan’ culture, toxic masculinity and all the other not-all-there people who can’t seem to distinguish between love and artistic admiration. But we can hope they’ll grow out of it.

Blurbs-of-interest: Michael Biehn was later in Cherry Falls and Bereavement; Dwight Schultz was in Alone in the Dark. Look out for Griffin Dunne as a production assistant.