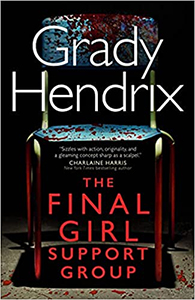 Across the aforementioned titles, what other stories are there to drill-down into in this sub-sub-subset of a sub-genre?

The title should clue you in to some degree; a group of women who survived various killing sprees in the 1980s gather for a regular trauma support circle, overseen by a potentially fame-seeking psychologist.

As is common, the players are largely named after actors or characters from across the genre: Marilyn survived a van trip in Texas in the 70s; Dani a Halloween night babysitting terror; Heather beat a killer known as The Dream King at his own game; wheelchair-bound Julia a post-modern small town murder spree by her boyfriend and his pal; and our narrator, Lynnette, is slightly looked down upon by the others for being more of an ‘unfinished victim’ when a Santa suit-clad loon skewered her on to mounted reindeer’s antlers. The group was founded by Adrienne, who offed the head of a killer who rampaged through Camp Red Lake in payment for the death of his son previously.

Yeah, that’s right, the most popular titles have been pillaged to provide the women their backstories. Most strikingly, Mrs Voorhees was changed to Mr Volker for Adrienne’s backstory, because Hendrix has presented a realm in which all killers are men, undoubtedly to compact the women vs. male-violence context in which the tale is told. He even begins the book with a paraphrased quote from Carol Clover’s essay Her Body, Himself that states “Boys die because they make mistakes, girls die because they’re female.” This never made sense in context – see this thing I wrote about just that comment. Still, their stories, which have each been made into film franchises, have been altered to reflect this, with mostly female victims featured.

When Adrienne is murdered, ever-paranoid Lynnette goes to ground, but finds her life under threat when someone has thwarted her various escape plans, including her Plan Bs and Cs… She goes on the run, seeking help from the others, who are then sent the less-than-flattering private manuscript she wrote about the support group. But then Dani is arrested, Heather’s abode is burned down – someone is coming after them from all angles. Lynnette ends up chasing down clues, taking a ‘junior’ final girl with her, meeting with a ‘fallen’ member of the group who deals in true crime merchandise, and ultimately having to gather the gang for a ride or die confrontation with the person behind it all.

The first half of the book is hard going, not least because the characters are largely miserable and twisted, with Lynnette being the least sympathetic, but it all comes together in time, culminating in a neat mirror image of slasher characters: Each of the final girls have become one of either the jock, the scholar, the (ugh) ‘slut’, the stoner, which makes for some interesting counter-theories. One sorely lacking aspect is any notion of camp – not that Hendrix should’ve gone all-out parody, but the story is so po-faced throughout it’s wound-strong narrative, some levity would’ve done wonders.

A real page-turner if ever there was one, but it’s worth noting the book, as a whole, is not a slasher opus unlike most of its kin, and goes deeper into the themes around final girl-dom than the others, though Riley Sager’s book is closest in plot. It’s due to be made into a TV series in time.