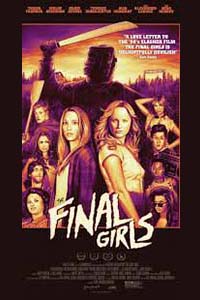 Laughter Lines: “Ever since I was a little boy I’ve dreamed of being a final girl!”

There have been a lot of love letter films to the 80s slasher movie in recent years, just last week I had the pleasure of watching Lost After Dark for the first time, and now, a shucks-no (relatively) high-profile release!?

Yes and no. The Final Girls is less a slasher film, more a concept movie about a slasher film. Poster artwork aside, the love letter here is more of a mother/daughter variety than stoned kids going skinny dipping and getting their throats cut. Its closest relatives across the genre would be a lovechild of Camp Daze, Behind the Mask, and Tucker & Dale vs Evil. With a little bit of The Cabin in the Woods, Cut and Midnight Movie thrown in.

Amanda Cartwright is a struggling 40-something actress who can’t live down her part in seminal 1986 summer camp slasher Camp Bloodbath, a proxy for Friday the 13th if ever there was (complete with ki-ki-ki sound effects). After another audition where it was brought up, she is killed in a car accident that only her teenage daughter Max survives.

Three years later, Max is convinced to attend a double-bill screening of Camp Bloodbath and its sequel by her friend Gertie’s franchise-obsessed stepbrother Duncan. When a fire breaks out in the theater and blocks the emergency exit, Max, Gertie, Duncan, Max’s crush Chris, and his self-absorbed ex Vicki escape by slashing open the screen and climbing through… into the film.

Stuck inside Camp Bloodbath affords Max more time with her late mother, or rather, the character Nancy she played in the film. Posing as additional camp counsellors, the group ride along and, initially, think about how they can return home, eventually settling on just hanging around the final girl character until the credits roll, unwisely thinking themselves outside of the killer’s scope.

Naturally, their presence alters the events of the film in a sort of Back to the Future way and Max goes all out to ensure that Nancy goes from bookish victim to the final girl, hoping to save her this time. 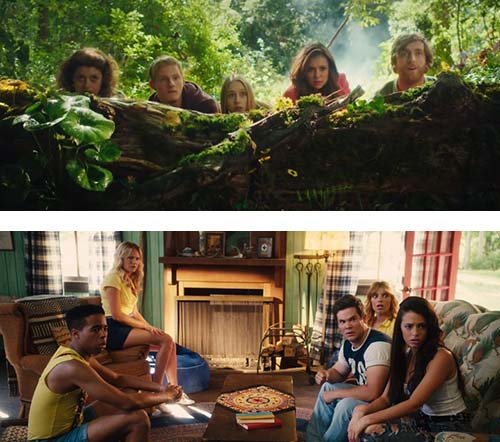 Much internet chatter has been made over the fact that the film was passed with a PG-13 rating Stateside: It has minimal bloodletting and no boobs. It emerges that The Final Girls is less trying to be a slasher film than just using one as its catalyst for a story about a grieving girl. And that’s fine, it’s even affectionate and deep when it needs to be.

What this also means is that the apparent homage to the genre becomes a wade through shallow waters of clichés used in a gazillion sketch shows. The ‘love’ professed for slasher movies doesn’t go beyond standard ridicule, even a touch of disdain – but Friday the 13th wasn’t this badly scripted, acted, or obvious in its day, and isn’t viewed as such now, unless its by people who haven’t really researched the genre past its most famous titles. Camp Bloodbath has far more in common with the likes of Twisted Nightmare than any Jason venture.

Complaints aside, there’s still a lot to like even if it means sucking up the piss-taking and viewing the film as a primary comedy, secondary drama, and down at the bottom of the stack, slasher flick. The present-day group’s immersion into the mid-80s setting provides some decent gags, from jock-archetype Kurt’s sexist jokes to dim-witted Tina trying to force an iPhone into a cassette deck. The comedic talents of Adam DeVine, Thomas Middleditch and Angela Trimbur each help to grease up the hard-to-swallow contrivances of the plot.

Best approached as a comedy with a slasher film backdrop: It lacks the insight of Behind the Mask but has the production unities we all wish Camp Daze had.