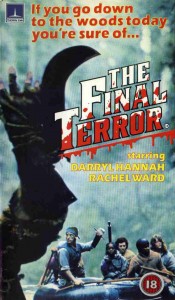 “If you go down to the woods today, you’re sure of…”

A.k.a. Campsite Massacre; Bump in the Night; The Forest Primeval

“And this is where you start paying… in crappy B-movies.”

Missed opportunities… life is full of them, mocking you and rubbing your face in it wherever possible, like the time I prioritized the supermarket over smoking at someone’s house, or the botched assassination attempt on George W. Bush.

Whodathunk a 1981 slasher film with a cast roster and director to die for would cop out and end up with nothing to die for? Or, rather, next to no one dying.

This cheapo Deliverance by-way-of Friday the 13th wannabe was produced by B-movie legend Samuel Z. Arkoff, who put a sextet of forest ranger dudes in the forest with four girlfriends on a camping trip and have them hunted by a crazed sub-human predator.

It should be awesome, with Friedrich’s gorked-out, half-stoned drawl, Hannah and Ward (who were rising stars by the time it was released in 1983), and a killer with a penchant for setting traps made of big logs and/or spring-loaded tin can lids that slash fleeing bimbos to ribbons.

And yet, eighty minutes has scarcely felt so long. Only three of the ten campers are killed and what bloodletting there is was scissored out of the UK video release (unless you’re ‘fortunate’ enough to have the release under the title Campsite Massacre), rendering the film even more dull than it would’ve been in its original incarnation.

A couple of good siege and chase scenes come too late to lift the spirits and once the killer’s identity is established, it’s not explained how or why they were even there or were doing what they were… Well acted, but when what matters most in a body count flick (bodies!) is all but absent, who cares?

Blurbs-of-interest: Rachel Ward was also in Night School; Mark Metcalf was in Playback and was the head vampire in the first season of Buffy.

tagged with before they were famous, get your own ideas!, rip-off central, slasher, star power, the 80s