After school hang out 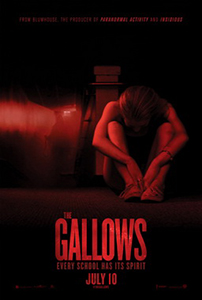 “Every school has its spirit.”

I don’t really ‘do’ theater. I get it, I have a couple of friends who tread the boards and have respect for them having to memorise all those lines without the ability for a second take, but I like shots, angles, playful camerawork.

The Gallows is a found footage production that orbits around a seemingly cursed high school play of the same name. In 1993, the lead actor was killed when part of the stage collapsed and he was hanged.

Twenty years later – never nineteen, never twenty-one – the school is again staging The Gallows, and leading man/ex-footballer Reese is having trouble with his lines. Filmed/bugged by his very irritating buddy Ryan, Reese soon lets slip that the only reason he’s doing the play is to get close to leading lady, Pfeifer. Some people are superstitious, and nobody is supposed to say the name of the guy who died – Charlie.

Asshole Ryan convinces Reese that the best course of action is to return to school at night and wreck the props so that the play can’t go ahead: He doesn’t have to embarrass himself by screwing up his lines, and doesn’t have to ruin his chances with Pfeifer by dropping out. 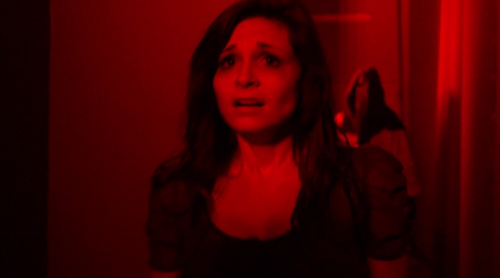 Sneaking in through an unlockable door Ryan found earlier, the two boys and cheerleader Cassidy, start to dismantle things when they hear a loud noise. Turns out Pfeifer was passing by and saw Reese’s car outside and thought he’d come to practice…

The truth comes out and, amidst the arguments it causes, the teens find themselves locked in. Even the unlockable door won’t budge. Then things move, dismantled pieces of the set have been fixed, a TV is found playing to itself – footage of the original incident no less.

It ramps up to doors that slam themselves, Ryan is thrown from a ladder, and apparitions of an executioner begin to manifest – Charlie appears to have woken up and traps each of them alone for a ritual hanging. There’s no slashing in this slasher, just rope.

The real ghost that haunts proceedings is that of The Blair Witch. Ever since 1999, FF horror has cropped up with regularity and a different spin on the same motifs – much like the slasher genre in that sense, it’s cursed by its own parameters, largely unable to evolve very much. 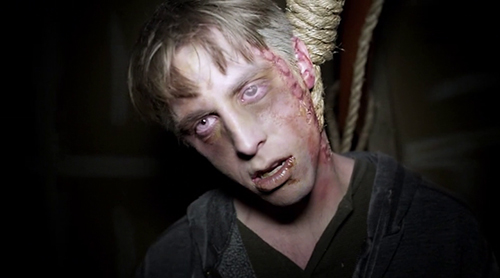 The real test with any FF film lies in the acting – can the usually small cast shoulder the burden of making their reactions sufficiently realistic? In the case of The Gallows I’d say yes. There’s not a weak link to speak of, and, like Blair Witch, the actors’ first names match their characters, possibly for ease of use in improvised moments where shouting Stacey instead of Joan could necessitate and entire reshoot since the last ‘cut’. Their fictional counterparts could do with a bit of a likeability shot though.

A fair twist surfaces at the end, which ties a neat bow atop things effectively enough. If anything, the entire production suffers from its seen-this-before quality (rich coming from a slasher movie fan, granted), but it’s got a couple of good jump scares and doesn’t grind on longer than is welcome.

tagged with get your own ideas!