THE GAY BED & BREAKFAST OF TERROR 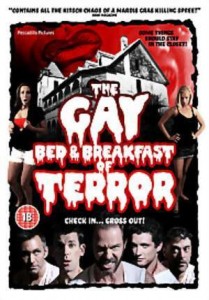 “Some things should stay in the closet!”

Dire-logue: “You will no longer yearn for the engorged penis of a well-muscled man in uniform! From this point on you will embrace the light of God and dream of the sugar-sweet Holy vaginal walls of your soon-to-be wife!”

A lot of gay men like slasher flicks, they provide a kind of sanctuary where the misfit final girl (who is normally sexually repressed and ‘outside’ of the microcosm of society that she exists in) outlives the nasty cheerleaders and fag-hating jocks to best the killer and save the day.

This said, gay characters have always been few and far between, normally wasted with prejudice or revealed to be the killer of the ‘normal’ heterosexual teens, overtly camp, in drag or completely ignored altogether. Gay-centric slasher films are almost as rare: Make A Wish pandered to fantasies around lesbianism and set it to a Friday the 13th-lite baseline, Hellbent got it mostly right by playing it, ahem, “straight” and going for the octane-over-aesthetics route and now to join the ranks is a kind of mash-up of the two, it’s The Gay Bed & Breakfast of Terror… 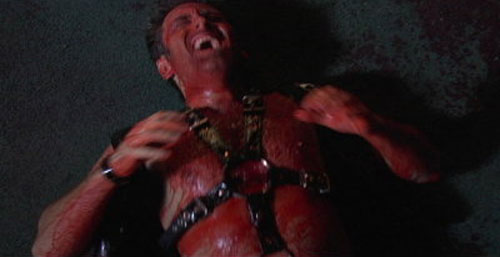 After a cabaret song about watching out for straight people adorns the credits, several gay couples drive up to the Sahara Salvation, having left it too late to book accommodation for a gay festival. The Sahara is run by mum/daughter oddball duo Helen and Luella, and the former wants to convert a gay fella from his “Satanic ways” to be a husband to oppressed-lez Luella. There’s also Manfred; a boy-slug hybrid who lives in a cage and likes to eat sinners.

The guests include an arty lesbian couple, a drag queen and his leather-daddy BF (played by director Thompson), an older guy and his buffed boy-toy, a couple of ‘normal’ gay guys and their fag-hag and a guitar-strumming hippie lesbian. Some of them soon fall victim to Helen’s Biblical-spouting and her crucifix-shaped dagger or Manfred’s green fangs. Then there’s partner swapping, sex, flashbacks to Helen and Luella’s homicidal-prompting experiences and a bloody finale of camp carnage. 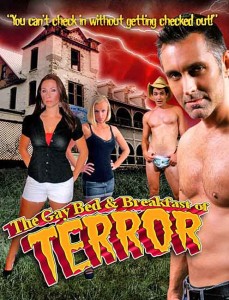 So it’s cheap and cheery, similar to But I’m A Cheerleader in its tone and execution (‘scuse the pun) with some funny lines and mannerisms: Helen screams her anti-gay diatribe at an en-dragged intended victim, to which he responds “if God hates us so much then why did he make all the beautiful people gay!!!!” There’s a hidden shrine to Reagan and Bush, a merry lesbian nun, hot players all around and a sense that those involved were having a great time.

As entertaining as I found The Gay B&B of Terror to be, it’d be unfair to ignore its less charming elements. Gay films still appear to lean towards stereotypical characters all too easily and there are an excess of in-jokes that those unfamiliar with gay culture will be bamboozled by. This is a fun party flick, if not a little overlong, but for an audience outside of the intended demographic, it’ll sink harder than a Bible verse in a pride march.

And who’s that woman at the beginning…?