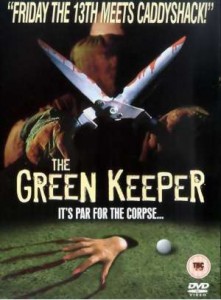 Dire-logue: “We pay these people minimum wage…you think they’d try and earn it.”

Another in the cavalcade of sports I don’t understand is golf, so it’s interesting to see it – and all of its stereotypical elements – parodied in this so-so slasher combo of Caddy Shack by way of killer lawnmower flick Blades, in which the mystery killer roams the lawns of the Summerisle Country Club, permanently handicapping golfers and snotty rich kids who’ve secretly crashed the place to party.

At the centre of the madness is Allen (Ruggerio) whose resented stepfather owns the club and has employed him as assistant Greenskeeper after his dad died in a freak accident. Or did he? In addition to these tribulations, Allen is a failing screenwriter with a bitchy girlfriend and is in dire need of a Queer Eye-style makeover. As his twenty-fifth birthday approaches, he finds solace in club waitress Elena, who similarly experiences the snipes of the condescending clientele.

Once the teen bashing gets underway, The Greenskeeper begins to show off what little flair it has with some purely generic nostalgia as the killer is illuminated in the background when lightning strikes and dim-bulbed soon-to-be-victims wander aimlessly in search of dead partners. The slayings are each suitably grisly, maintaining their demented comedy-laced appeal: one victim is castrated while another is decapitated with a pair of pruning shears.

However, the need for Scream influenced self-awareness is annoying, especially when mixed with the needless toilet humour on show when a group of uninvolved stoners watch a teen slasher flick called The Milkman and the doomed rich kids are all named Chip, Chas, Champ, Chet, Mary-Katherine, Mary-Beth and Mary-Jane, perfectly capturing the who-cares-what-they’re-called essence of many body count flicks, but making it difficult to work out what’s going on at the same time. By the end of these eighteen holes, there isn’t much drive for another round.

Blurb-of-interest: Michael Short was in Paranoid.