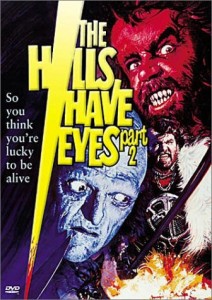 THE HILLS HAVE EYES PART II

“So you think you’re lucky to be alive…”

The old mind struggles but this may well have been the first slasher flick I ever saw, late night Bravo channel stuff with my dad and my sister in the early nineties and there are no two ways about it, this film sucks. It’s the epitome of cheesy, schlocky, teen-kill trash and once considered a contender for the all-time worst sequel. But I fracking love it!

Craven’s ’77 original pitted a whitebread family trapped in the middle of the desert against the hill-dwelling insurgents who wanted to pillage their number. It was a thought-out tale of families from opposite ends of the spectrum thrown together in an explosion of violence and screaming and scratching and biting and stuff, remade to malevolent excess by Alexandre Aja in 2006 and followed by an equally grisly sequel the following year.

Claiming he ‘needed the money’, Craven signed on to write and direct this sequel, reportedly shot in 1983 and not released until 1985. Evidently driving under the influence of Friday the 13th (even drafting in Harry Manfredini to sort out the score), Craven wrote a cast of teenagers into the equation to serve as knife, axe and machete fodder for the extended family of psychos. After a couple of flashbacks from Bobby, who made it through the events of the first one, we’re reintroduced to Ruby, the turncoat, who, with said headband-wearing teenies, embarks on a cross-desert bus trip with some miracle motocross fuel that will make them all rich and/or famous. I wasn’t really listening to the intricacies.

With bike-ridin’ trio Roy, Harry, Hulk (!) and mechanic Foster, there are their tag-along gals, Jane, Sue and blind psychic Cass, who we could tell is going to be the final girl even if we were blind. Rounding out the group is the best character to return from the original – Beast the dog, now sporting a yellow scarf, Littlest Hobo-style. Remember him? He saved the day before, chewing up the ankle of nasty hill psycho dude Pluto. No? Still hazy? Well, never fear – Beast can certainly remember as he barks us along into his very own flashback! No, really… The screen goes all wavy and blurs into old footage of his pro-middle class savagery.

The gang realises they forgot to account for the time zone difference and, in an effort not to be late for whatever it is they’re going to, they vote to cross a desert track, which soon disables their funky red bus and they end up at an “abandoned” ranch-cum-mine.

The biker dudes decide to rev off into the wilderness in search of gasoline while the others explore the locale and Cass passes time by using one of those embossed label maker things to stick a love message to Roy on his (bike) helmet and starts to ‘sense’ things. Bad things, of course. It would have been nice if she sensed it was a sanctuary for unloved donkies and waterbuffalo, but it’s not and she doesn’t. She senses…eeeeeevil.

Maybe the eeeeevil that Cass senses is closer than she thinks… Maybe it’s her friend Sue! Maybe her psychic powers allow her to see that Sue is no other than Sherry Palmer, neo-first lady and scheming wife to President Palmer in 24!!! It’s all a cunning disguise, the headband, the lycra… That’s her below left, beneath Beast and Ruby, Penny Johnson a.k.a. Sherry Palmer in one of her earliest roles. I’m not sure what she’s doing with herself there but she didn’t get a great many close-ups in the film.

Disappointingly, it transpires that Sue is not the killer and the real trouble comes in the form of a duo of hill-eye-havers, Reaper and the not-so-dead Pluto. Ruby – arguably looking worse in her cosmo-80s wear than she did in her rags – comes clean and ‘fesses up to being the girl-in-the-story that was conveniently told on the bus and spouts the usual ‘we’re all in danger’ garb. Meanwhile, Harry is killed and Roy incapacitated by the killers, who, as darkness sets in, descend on the ranch and it’s dim-bulbed newcomers.

This is where the cliches come thick n’ fast, but they’re enjoyable cliches. Hills II is one of those slasher flicks with a bit of a sense of humour to it. The characters are shallow but likeable; we care about them in the sort of temporary way we care about people we meet by the pool on holiday and the way we cared about the counsellors of Camp Crystal Lake. They’re just fun loving kids doomed to fates worse than, uh, not dying. 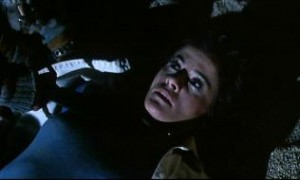 Pluto and Ruby have a confronation that is intercepted by the springiness of Beast, who soon scares him away, while Reaper stalks and slays the others, who defy Ruby’s warnings and canter off for showers or private rendezvous until Reaper bear-hugs and throat-slashes them into the next realm.

While Beast licks Roy back into usefulness and helps him do away with Pluto once and for all, Cass discovers the bodies of her friends, identifying them with her fingers and then catawaling their names along with the odd “why!?” Reaper follows and she manages to escape long enough for Roy to save her and formulate a plan that puts an end to both Reaper and their miracle bike gas, so that they and Beast and can enjoy the hike back to civilisation.

Minimal bloodshed, strangely lucid killers, token blindness and a dog with the ability to recall events from eight years ago… The ingredients of tripe, surely, but I’d rather watch this entry than the original or either of the ‘re-imagined’ films. Wes Craven scripted the 2007 Hills Have Eyes II, which sadly opted not to replicate the story here and was only a notch above total suckiness.

tagged with before they were famous, Nu-di-ty, sequel city, slasher, slasher films that aren't supposed to be funny but are funny, spunky final girl, the 80s