This home is not a House 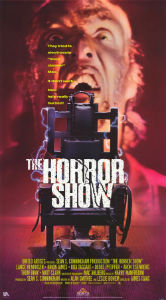 “They tried to electrocute ‘Meat Cleaver Max’. It didn’t work.”

A.k.a. House III: The Horror Show

Laughter Lines: “I was working on a theory of pure evil as a form of electromagnetic energy.”

Wes Craven may have fallen out with people over the mass-commercialization of one Frederick Krueger from 1985 onwards, but it didn’t stop him almost recreating the character with the rather lame Shocker in 1989, which also came out a few months after this similarly derivative Elm Street squatter, in which basements and boiler rooms are prominent set pieces.

While it’s known as House III virtually everywhere outside of its home country, there’s nothing that connects The Horror Show to the previous – or subsequent – House films.

Instead, this is one is the generic tale of cleaver-wielding sicko Max Jenke (James), who, after murdering 100+ people, is subdued by Henriksen’s archetypal detective-cum-family man. At Jenke’s execution, he swears to come back for the McCarthy family and, of course, does so through something to with electromagnetic energy, as later explained by grad-student Bray (see Laughter Lines).

And so, Jenke offs a few ancillaries while trying to turn Henriksen mad and make him look like a killer when his daughter’s boyfriend is found cut to pieces in the basement.

Some amusing scenes occur along the way, most memorably the mutant turkey, but the film seems so desperate to create a franchise for itself that it forgets to be either scary or particularly entertaining. The ever reliable lead battles with his badly written character, but James appears to be having fun as diet-Freddy, complete with requisite high-pitched cackle.

’89 was the year that the nails were hammered hard into the slasher movie coffin, with disappointing outings for the main three boogeymen and an emphasis on FX over plot. There’s some nostalgic hair, fashion and music here, but it’s not enough to grab a third star.