“…The night new blood is pledged.”

Dire-logue: “[Here’s] to being young, staying young, and dying young.”

Four-and-a-half stars!? You may spit your coffee across your keyboard – but yes, almost top marks for my favourite stand-alone slasher flick of the 80s – it is The Initiation. Read on and I will explain my madness reasons…

Things begin in the normal film style with the credits. These are boring. After the credits, things begin in normal slasher film styleé with a nightmare sequence of a little girl wandering down a hall, into her parents room, there’s a fight, there’s a fire, there’s the no-longer adorable child wielding a knife… Time to wake up! The dream belongs to Kelly Fairchild (Zuniga, later from Melrose Place), who is rudely snatched out of her subconscious by a load of sorority girls with candles chanting (somewhat ironically given what’s to come) “Delta Rho Chi, never will die,” over and over and over. 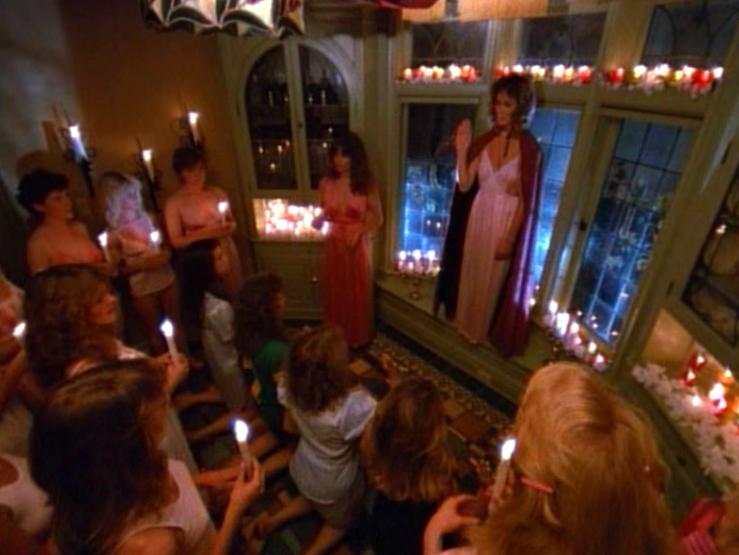 Meanwhile, Kelly flits between seeing her arms-length parents (Miles and Gulager) and frequenting ‘the dream factory’ run by young professor Peter and his absolutely adorable assistant Heidi. Together, they aim to expose the root of Kelly’s recurring dream and find out what happened before a convenient amnesia-fest for everything before she was nine. 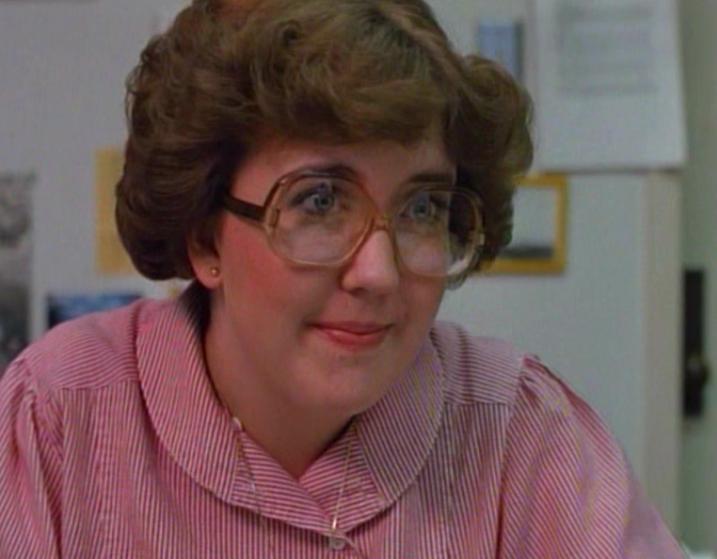 Elsewhere, a group of mental patients are released from their asylum and one of them, seen only by his surgical gloves, rakes the stern ward nurse to death and steals her car. Who is it? What do they want? What does that man keep doing with his tongue?

Kelly’s parents try to hide the truth from her and also the viewing audience by talking cryptically and blaming themselves for ‘what they’ve done’ la la la… The teens attend a come-as-your-suppressed-desire party where we acquaint ourselves with who’s going to die later, see a giant walking penis and witness Kelly and Peter hook up.

Amidst the slowly building madness, Peter and Heidi wax lyrical about what’s up with Kelly, who’s dream features standard Freudian, Jungian set-pieces: mom, dad, fire, mirrors – or is it…deeper? You don’t have to procrastinate for too long to figure out Kelly’s dream is, in fact, a memory, that the burnt guy is probably the same burnt guy working at the asylum and that there’s gonna be a whole lotta death comin’ our way! 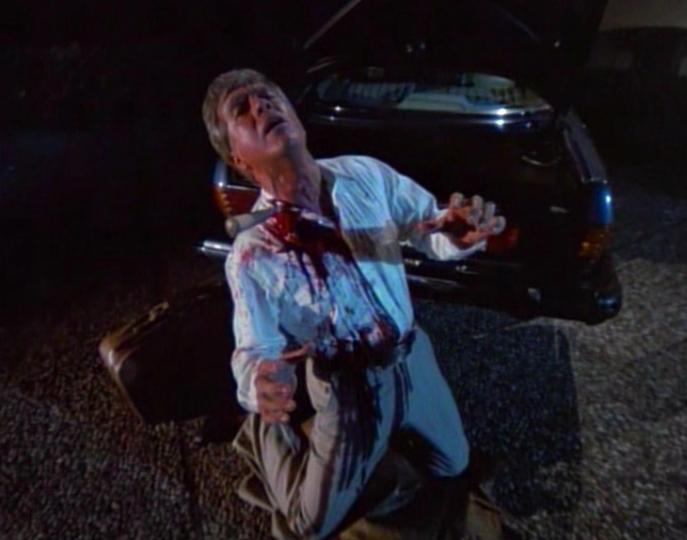 On Prank Night, Beth decides that hazing jokes aren’t for her and drops out, leaving Kelly, Marcia and Alison to gain access to the mall where, unbeknownst to them, Todd the security dude has already been raked to death!!! with the small, trowel-sized rake thingy the killer likes to use. Alison dons rollerboots to ‘create a diversion’, while Megan and three frat boys enter the mall to scare the crap out of the pledges. Boys include walking-penis Ralph, Megan’s dorky boy-toy Andy and ‘other bloke’ Chad.

The teens split off into groups and are stalked and killed by axe, bow and arrow, and hunting knife. The original UK video release had been trimmed by 59 seconds so it was nice to catch up with the grue on the DVD release, which includes a gratuitous cross-cutting between two teens having sex and another being stabbed to death, while screaming into the tannoy system. 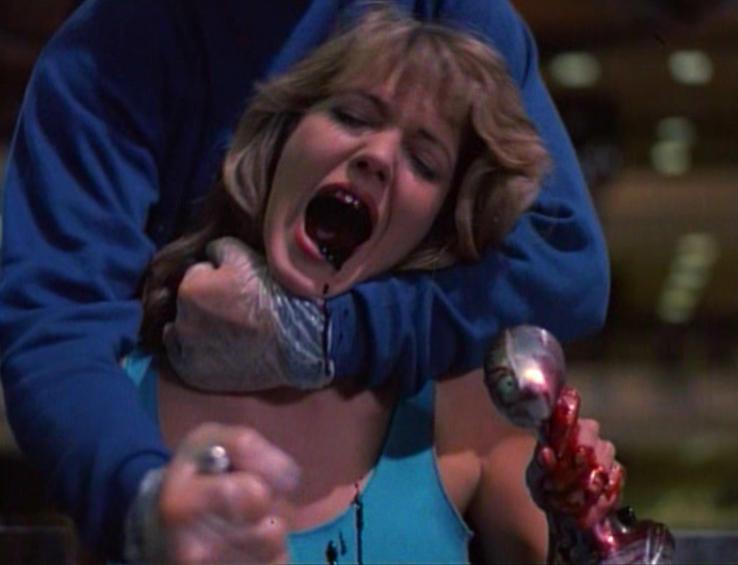 This is a customer service announcement: Aaaaaaarrggghh!!

Peter and Heidi figure out most of the mystery and he gets to the mall just in time to save the day – or so he thinks – as The Initiation pitches its curveball straight out of nowhere, opening us up to one of the campest, most fabulous reveals EVER! I want to tell you because I love it so much but up until this point the filmmakers were savvy enough not to let anything slip so you’ll just have to see it for yourself. Or read someone else’s review who gives it away. What distinguished The Initiation for me was chiefly a mix of more comprehensive plotting and rounder characters: few films would dabble with so much Freudian-psychology so in your face and create the story around it. The identity of the killer isn’t spelled out for you, repeat viewings show that the clues are there but, unlike most other horror movies, there are no enormous neon arrows steering you to figuring it out first.

Kelly is a rather standard final girl, battling with her rich-and-therefore-emotionally-barren parents and trying to fit in with her friends; Marcia is her luckless best friend who informs the others that contrary to their assumptions about her, she is not a virgin and was raped as a child, never having told a soul. It’s a sad, desolate moment, waaaay more than we expect from a slasher flick character but it makes us care about her fate. Hell, even Alison is more than your uno-dimensional slutty girl (despite appearing naked several times). The creators cared about their characters and therefore so did I, I didn’t want them all to die so brutally as they do. 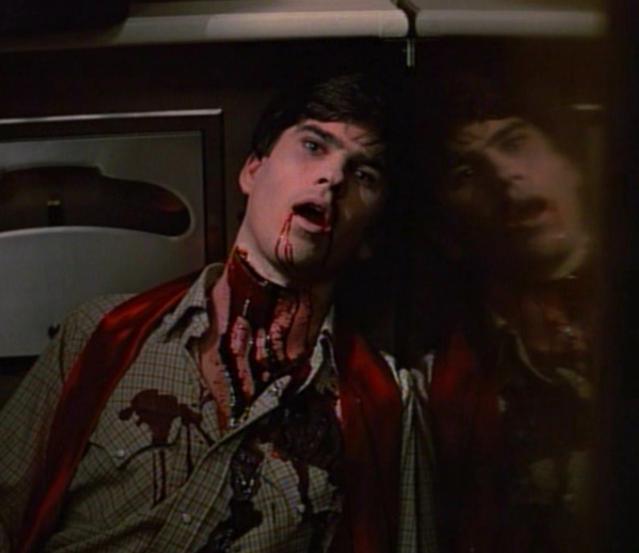 Also impressing is the use of light and dark and shadows: the killer moves about in the background or appears as a creeping silhouette to catch their next victim: the camera work is great, timed to catch every glimmer of light on a sharp knife blade, swooping and panning to make the most of the shot and giving us way more than we expect in low rent filmmaking. Considering the crew shot overnight in a Houston Mall, the number of takes to perfect some of the setups must have been through the roof. 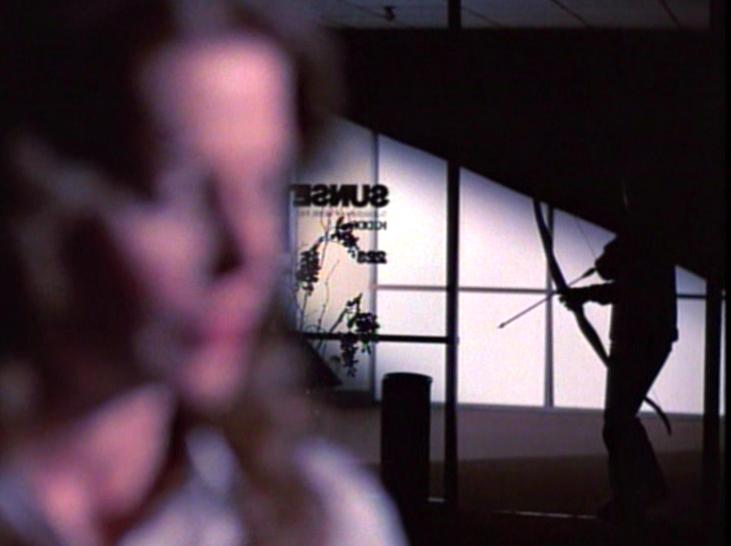 I love The Initiation; it’s enthusiastically made, well-acted, brilliantly shot, involving, confusing, surprising and you get the feeling that they really put their hearts into making a quality horror film. For a horror film it retains a crucial sense of fun (“Kelly didn’t get the blessing…” / “She’ll live without it.”) – there’s a huge walking penis for Christ’s sake!! 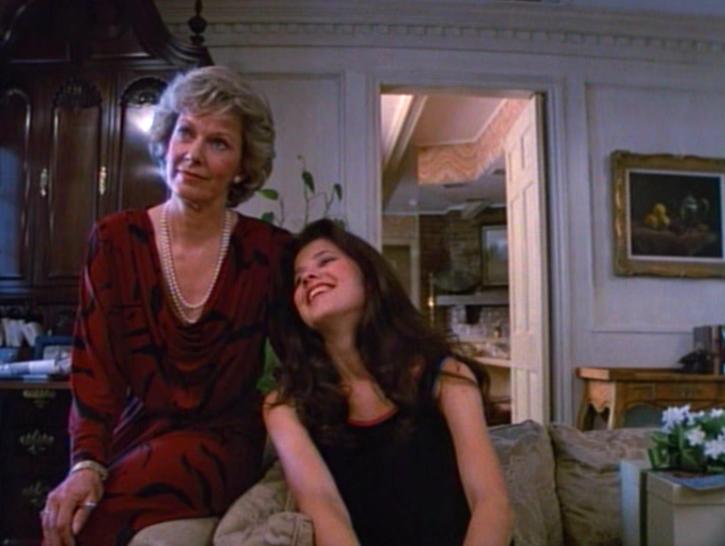 Blurbs-of-interest: Daphne was an early victim in The Dorm That Dripped Blood; Clu Gulager was the dad in A Nightmare on Elm Street Part 2 (ironically another film about dreams, return of the repressed blah blah); Vera Miles was, of course, Lila Crane in the first two Psycho flicks.

tagged with before they were famous, death on campus, slasher, sorority, spunky final girl, star power, suck it, the 80s