School is in session 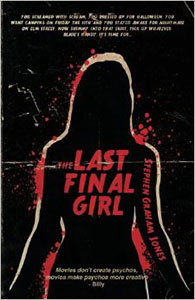 With more time to read while I cruise around Europe in my tin-pot van, I was recommended The Last Final Girl by a couple of folks so laid down my wad – or rather, pressed ‘buy’ in the Kindle store – and went to task.

Unlike most novels, The Last Final Girl is presented more as a script. For all I know that was it’s original intent. Thus, the style takes a bit of getting used to when you start reading: Scenes are introduced like cuts and it’s all present tense because of this. Once you’re used to it, the story begins taking precedent and you stop noticing.

So it goes, a girl fends off a killer disguised in a Michael Jackson mask (referred to as Billie Jean for the rest of the tale) who has done away with several of her friends. After it’s over, she returns to school and the expected hoopla surrounds her.

On the sidelines are Izzy and Brittney, two fringe girls obsessed with slasher movies who believe that what happened out in the woods isn’t over, not least because the killer, though defeated, has not been recovered.

Throw in a reporter (‘Jamie Lee’), several characters with final girl names, and more than one agenda on the cards and The Last Final Girl edges away from just being a Xerox of Scream to its own post-post modern story. The insights of the main characters will arouse the jaded loins of any 80s-era fanatic.

The downers are mercifully few and far between, but The Last Final Girl does, in book form, something I really hate in film form: It screws with the ‘neatness’ of the body count. Not everyone who dies dies because they are murdered – some are just grim accidents, all be them partly because of the killer’s presence, but it ends up a bit of a miss-mash come the climax and I wasn’t sure who killed who or why.

Also, while the knowledge base of Izzy and Brittney would have them hosting their own convention, I just didn’t buy it. It’s probably my spiral towards middle age, but the idea of two teenage girls knowing everything us ageing dorks obsess over seemed like a stretch.

Still, artistic license permits these little leaps and it’d be a rather dull affair without them. Strongly recommended.