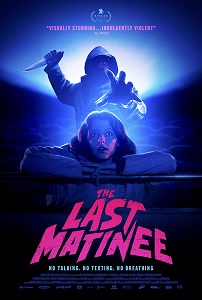 “No talking. No texting. No breathing.”

Hopefully Uruguay will forgive me for the first thing that comes to mind when I think of the nation being that moment in The Simpsons where Homer sees it on a globe and pronounces it: “U R Gay.”

Uruguay gets the last laugh though, as this is one sexy bitch of a giallo slasher.

On a rainy day in Montevideo in 1993, a small single-screen cinema showing a low-end Frankenstein film (actually a real movie directed by actor Ricardo Islas, who plays the killer here) attracts a small number of punters: A couple on a first date, some teens off their trolley on vodka, the Brooke Shields-a-like girl one of them was lusting after on the bus, and a young boy who has snuck in. 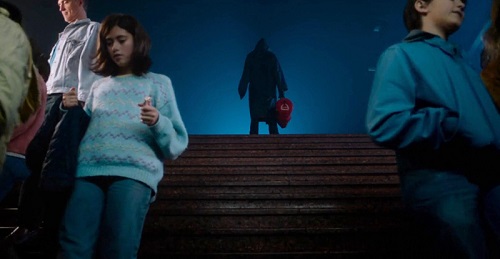 Projectionist’s daughter Ana has come to relieve her overworked father, packing him off in a cab and babysitting the reels while studying, much to the annoyance of night manager Mauricio, who’s not paid enough to care about throwing out an angry homeless guy escaping the rain.

Regrettably for all of these people, a slicker-clad lunatic with a bag of grisly tricks has also crept inside and makes quick work of locking them in. He then sets about killing those inside one by one to take their eyes and add them to a jar for later snacking. Eww. There’s a brutal throat-cutting while the victim is puffing on a cigarette, resulting in smoke exiting the next wound in a gruesomely artistic way; two kids making out are skewered together in an eternal kiss, as well as death by projector.

The simplicity of the plot is one thing, and some of the characters’ names aren’t ever mentioned, but if you’re looking for a film that revels in its aesthetic details – this is it. Almost comic book-like shots play out as the killer hones in on his victims, with 80s-style fragmenting of the space beforehand, daring us to guess where he is, when he will strike, and what he will do.

A great scene utilising this approach occurs when a bored Gabriela decides to make the movie going experience more interesting by giving Horacio an impromptu hand-job; elsewhere two teens are sharing a tentative kiss; the on-screen tension is building…; who will the killer take out? It’s a beautifully conducted sequence, shocking and even a little bit sad. 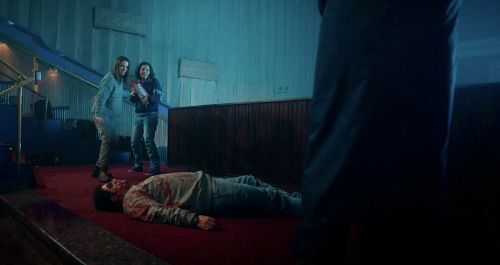 Ana eventually discovers the killings, although it’s timed nicely with the celluloid breaking and what she believes to the audience booing over the incident is actually someone being knifed to death. From there the survivors try to fend off the killer and raise the alarm. Surprisingly, they get through to the cops for a change, but they also fall foul of the Bad Choice trap where they have the killer out cold but decide to flee rather than bludgeon him to death with the weapon in their hands. It’s a slasher film though, do you really want sensible decision making?

Contenti’s attention to visual detail is the Chef’s Kiss USP of The Last Matinee, truly not the first slasher flick set in an underattended movie theater, but by far the best looking. Almost every frame feels considered and created rather than just cut-in, every shot composed rather than pointed-at-and-shot. The result is an impossibly handsome piece of horror cinema, and the comparable lack of characterisation lends itself well to the bolt-from-the-blue nature of the killer’s attack on a bunch of strangers. 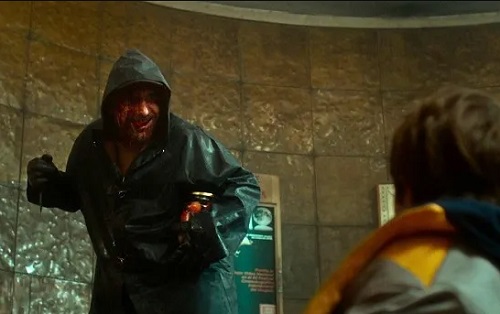