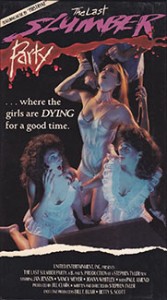 “Where the girls are DYING for a good time.”

Laughter Lines: “My parents would decapitate me if they ever caught me kissing a boy!”

Time passes by so quickly. Unless you’re the Righteous Brothers or find yourself sat down with The Last Slumber Party, a film so inherently dreadful in every conceivable way that there aren’t enough sublatives in the English language to illustrate just how terrible it is. It genuinely felt like I spent the whole day watching it.

Unhappy with the concept of having a frontal lobotomy, a mental patient escapes, dons a surgeons scrubs, and journeys to the family home of his doctor – who owns the world’s most hideously decorated house – where his boring daughter Linda, is to host a slumber party for her equally crap gal-pals Tracy and Chris, who hope their boyfriends will crash proceedings and repeatedly (and I mean REPEATEDLY) tell Linda that Scott will call her.

Meanwhile, the bug-eyed psycho is taking a scalpel to schmucks who cross his path and soon finds himself at the party. For a short while (although nothing in The Last Slumber Party feels anything close to short) things play out like any cheapjack film: The girls watch TV, snack, and jabber inanely, repeatedly saying “You scared the shit outta me!” to one another, even when absolutely nothing has happened. 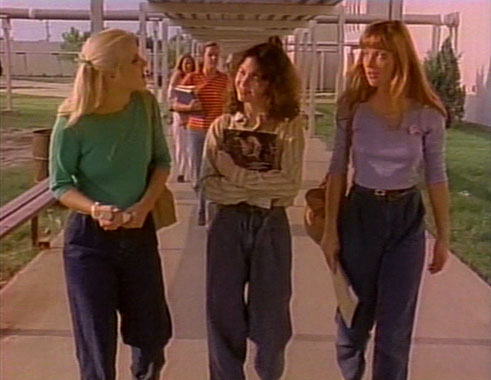 Boys come to “scare the piss out of the girls”, which entails climbing up a ladder with a dollar store Halloween mask on. The girls barely blink the prank is so crap. Eventually, the psycho slashes a couple of throats, loitering behind victims in rooms there really is no place to hide in. The girls wonder where their boyfriends are, referring to them with a tirade of homophobic names (queer/faggot/homo, i.e. “He’s such a homo he even took the bedspread!”)

However, someone else comes along and kills one of the boys in the same manner, with virtually the same outfit on. What? He goes to slice one of the girls but is instead fatally attacked by the first killer. Chris has a random dream that people are dead. Said dream includes her standing at the front door staring out of it for like sixty seconds doing nothing. NOTHING. I am watching a girl stood in a doorway doing nothing.

Everyone else dies and when the doctor returns, he’s immediately called back to the hospital by America’s most sarcastic nurse: “He’s escaped”; “Escaped? Have you called the police?” – this is gold – “No doctor, we all thought we should call you first.” 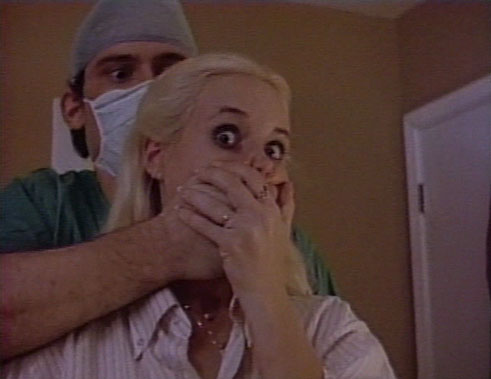 Doc goes back to hospital and is murdered in the elevator, his body magically transported back to the house and tossed in the pool literally seconds later. Chris goes to his aid and is then mercifully slashed by the killer.

THEN SHE FUCKING WAKES UP.

Chris gets a call from Tracy and tells her: “I had a nightmare within the nightmare!” to which Tracey responds: “I’m bored out of my skull.” You and me both, love.

They drive over to Linda’s just as Linda receives a call from the hospital informing her the psycho has escaped and she should shut all the doors. However, she picks up the phone without saying hello or identifying herself, so how the fuck does the person on the other end even know who it is or when to end the call!? 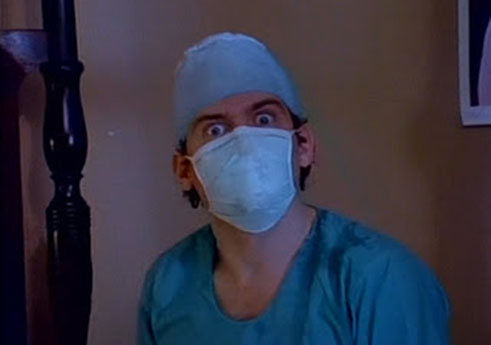 Aggressively bad. Watch for the botched throat slashings; the same shot of the killer wielding the scalpel at the camera used about a dozen times. And Chris fucking sucks as the choice for final girl, not that either of the other “I’m 37-but-can-play-17″ “actresses” would be any better, but she’s by far the worst with her shrill voice and nasty homophobic comments. The horrific thrash metal soundtrack by Firstryke (even used as some sort of plug on that VHS cover!) should’ve clued us in early on as they wail “it’s just a nightmaaaaaare!” Damn shame I didn’t wake up and find The Last Slumber Party wasn’t real either.

Now I know some of you will think “it can’t be that bad” and consider trying it. Don’t. Don’t be the fool I was. Even as a freebie on YouTube, this is 72 minutes you cannot claw back. A very possible candidate for worst horror film ever made. Ever.

The Last Slumber Party is a B & S Production. I think we can all agree what that might stand for.

tagged with hair don'ts, I want to die, slasher, the 80s, weird-ass twist, what the hell!?, who finances this crap!?