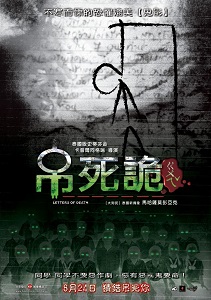 THE LETTERS OF DEATH

Earlier this year I did a thing about the many rip-offs of Final Destination, which garnered quite a few suggestions of films I was unaware of, including this fun Thai export, which crosses the weird accident formula of the FD series with touches of The Ring and those annoying chain letters we all received at some point during the 1980s.

Things kick off with a superb shock that I won’t give away, but American movies could learn a lot from the ejector-seat jolt and the fact that it comes out of nowhere, rather than being ruined by music or is one of those entirely fake ‘innocent person puts their hand on shoulder’ gags. Anyway, young people are dying at an alarming rate, and a group of old school friends meet when one of their buddies takes a tumble over a balcony and, in a make-sure-the-job-is-done-right moment, then hit on the head by a flowerpot.

They discover that each of them has received a letter with a hangman puzzle on it, telling them to send it on to 29 other people within a certain time frame. Unfortunately the subtitles didn’t offer the courtesy of translating the content of the letter, but this was the crux of it: Send the letter to 29 others, try to solve the hangman riddle, or die.

As usual, most of them ignore the threat, so it’s down to nice guy underachiever Seri and awkward-girl-turned-beautiful adult Nattaya to put the pieces together. They soon discover an order to the deaths, too late to save one guy being hauled upside a crane into rebar, or another being blindsided by a flying saw blade… Some even choose suicide as a means to beat the game.

Intermittently, we’re treated to flashbacks of the group’s year in primary school, where bullied outsider Wan was tripped and took a lethal tumble down some concrete steps and never came back to school. Could he be the one who’s sending the letters? Suri, Nattaya, and chief bully Pruek poke their noses in, trying to find out what happened to Wan and where he is now. Pruek is injured in a car accident and ends up being cut in two by broken glass when Wan appears as a hallucination at the hospital and sends him running only to slip on a freshly mopped floor!

With numbers dwindling down to the last four – curiously the endangered females are last on the list, I wasn’t sure if this was to do with the class numbering system mentioned or that only the boys bullied Wan? – Suri and Nattaya travel to find their old teacher to see if he can remember Wan’s real name, which is the key to the hangman puzzle. Meanwhile, a girl drowns in a bath for unclear reasons, and another is caught in a tumbling elevator.

The Letters of Death is a good diversion from the usual hack-n-slash opus, liberally taking cues from Final Destination left, right, and centre, but doesn’t quite pack the creativity to back up its demises: Victims are either just stupid or the offending items that kill them just break for no reason. Asian horror movies lean heavily on the mystic, so Wan is quite possibly pulling the strings from beyond. Either way, it’s not clear enough to underscore itself with a line of credibility. That said, there’s a good last-minute revelation that would see a few sequels in the canon were it successful enough. Twelve years on and nothing has come up, so I’m guessing it wasn’t.

tagged with final destination, get your own ideas!, gore o'clock, slasher