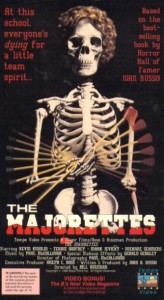 “At this school, everyone’s DYING for a little team spirit…”

Dire-logue: “Sluts! Teases! Flaunting their bodies… They needed to be purified.”

Well… it starts alright. A teenage couple necking in a lovers lane – geek and cheerleader – are slashed to ribbons by a masked killer. It soon becomes clear that someone is hunting down the majorettes-slash-cheerleaders of the local high school.

After an hour of stalk n’ slashery, the film suddenly morphs into a tacky revenge thriller as the boyfriend of the most recent victim pegs it with a rifle to shoot a group of drug dealers he thinks are responsible for everything. But aren’t. Because by this point the killer has already been revealed and remains off camera for absolutely ages before reappearing for one last homicidal fling.

Crap subplots about inheritance, teen pregnancy and “what’s wrong the with nation’s youth” (a fundo preacher is chucked in for absolutely no reason) only makes things worse and by the time the credits eventually roll, it feels like days have passed.

The film ends on an especially infuriatingly hollow twist that nods towards sequelville. Mix in yet another mentally challenged (and thus perverse of course!) caretaker, a scary German nurse, a mute old woman called Elvira, and no final girl to speak of, and you’ve got 87 minutes of horror. But not the right kind of horror. Admittedly, typing it out makes it sound alright.

This was based on John Russo’s book (reportedly written before Halloween was filmed) and was produced by some of the Night of the Living Dead crew. These things matter not, The Majorettes fucking sucks.

tagged with death on campus, Nu-di-ty, slasher, the 80s, what the hell!?, who finances this crap!?