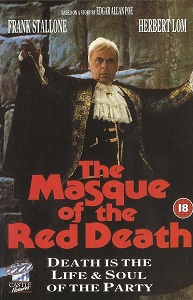 THE MASQUE OF THE RED DEATH

“Death is the life and soul of the party.”

Shot in South Africa, this is one of two adaptations of Poe’s story shot in 1989, morphed into a masquerade ball slasher pic by screenwriter Michael Murray. In this version, a red caped and masked fiend sends a group of attendees to the slab.

Pretty McBride is a journalist who snuck in to try and get some snaps and a story from loudmouth soap star Vaccaro at the final party of the mysterious Ludwig (Lom) in his creepy Bavarian castle. Those up for the chop include actors, designers, and doctors with whom he is somewhat intimately associated. They’re offed by sword, axe, and even razor sharp pendulum.

Frank Stallone gets top billing for his rather marginal part, but McBride carries the weight of the film as the sympathetic – and ever so slightly simpleminded – heroine. Lom is good in his is he/isn’t he role of host.

Most observers have dismissed this as a travesty to Poe’s work, but if an interesting take on the tale, marred by the revelation of the rather comedic killer, which unearths a couple more twists before a rather satisfying end to their evildoings. Silly laughs do divert proceedings time and again, although there’s one honest gag at the end of the credits which is worth hanging on for.

tagged with after they were famous, slasher, star power, the 80s