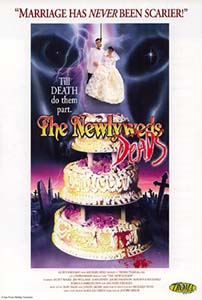 “Till DEATH do them part.”

This often laughably inept Troma has a skewered moral compass among it’s many, many problems. Beware spoilers…

A lodge owner makes a play for the hot blonde who’s just checked in, only for a wig to slip and reveal that she is in fact a he. A fight breaks out and the owner kills her.

Fifteen years later (never fourteen, never sixteen), the owner’s own wedding day is disrupted by the appearance of the ghostly transvestite, who proceeds to begin killing guests at the lodge in between tormenting him, laughing like Freddy Krueger through a worn out microphone, three rooms down the hall during an electrical storm.

A psychic woman who pieces bits of the story together stops by with her skeptical husband, as well as a dim-witted couple, oversexed couple, an aged, deaf couple, and two rockers/stoners – all of them guests at The Newlywed Lodge. But in the case of one couple, it’s a surprise trip for him to propose, despite the name of the place, his girl has no clue!? 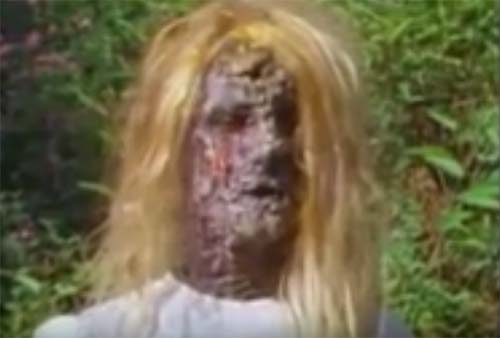 The film is a complete mess, with one guy driving off to find a functioning phone, the psychic woman realises he’s in danger and goes off on foot to find him, but makes it to the same place in seconds, whereas it took him some while to drive there. She finds him dead in front of a crowd of people, but returns to the lodge as if nothing has happened and resumes helping the remorseless owner.

Several characters completely vanish from the film and, come the end, there are seven people running around the woods at the same time, as well as the ghostly killer. Eventually, psychic woman sacrifices herself to save the murderous owner, WHO GETS AWAY WITH IT!

Objectively bad in every way, but some of that bad at least seeps over to slack-jawed amusement. Double-bill it with Honeymoon Horror.

tagged with Nu-di-ty, slasher, spoilers, the 80s, what the hell!?, who finances this crap!?