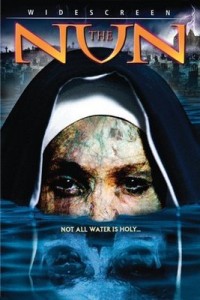 “Not all water is holy…”

Dire-logue: “So let me get this straight: are you trying to tell me that all this is some sort of I Know What You Did Eighteen Summers Ago or something?”

Some filmmakers must want to tear their own ears off with frustration when studio executives meddle with their creativity. In some cases it might make the film better, but in others it’s sure to render the production a lost cause. Such is the case of The Nun, a handsome looking Spanglish production, which, for 95 of it’s 102 minutes is an interesting, kinda creepy little supernatural slasher – and then comes that twist. 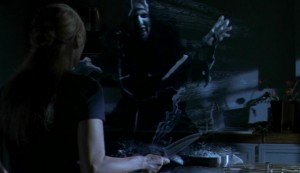 Six naughty Catholic school girls accidentally murder the sadistic Sister Ursula after she goes too far abusing one of them. Eighteen years later, the grown women are falling victim to her ghost, who manifests from water, usually from overflowing baths or sinks. When young Eve witnesses the death of her mother by the nun and then the outcome of another tragic ‘accident’, she agrees to tag along to Spain with her friends Julia and Joel and pick up where her mom left off, meeting the other surviving girls to figure out why they started dying… Eve gets on the trail with her pals and a sexy young wannabe-priest and they all end up at the condemned convent with the final two women in a bid to put an end to spectre-nun for good.

The first third of The Nun is a professional looking mix of Darkness Falls and Final Destination with a sprinkling of J-horror conventions, showing off some good demises and competent CGI work. However, once the action shifts to Spain (despite the fact it’s all evidently been shot there) and the main characters make their way to the old school, things start to drag… There’s a mini-twist about the deaths reflecting those of the girls’ patron saints and if things had ended with the destruction of the nun all would be well. 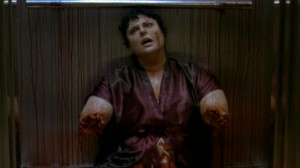 The twist that is ‘suddenly’ revealed is so crap and reveals so many glaring inconsistencies that you could fly a Boeing 747 through the plot holes, absolutely shattering what credence the film had amassed unto this point. Given the explanation provided, what they propose to be the truth could not have even happened at all. It will make you want to die your own grisly death because it sucks. Sucks, sucks, sucks!

You want to know? Seriously? OK…

There is no nun, Eve is the killer. So explains a miraculously clued-in Joel at the end, a “traumatic event” made her the killer, i.e. her mom’s death, but wait – according to earlier dialogue, mom was the second victim as the first burned to death in London a few days earlier. Did Eve fly to London and kill her then? If so, she also has the power to walk through walls and manages to oversee the elevator death before she even arrives at the hotel! It’s also apparently possible to impale oneself with a speargun.

Honestly, did they think everyone watching had Alzheimers?