Actually it -is- human, and it doesn’t really use the axe a lot – so just run away 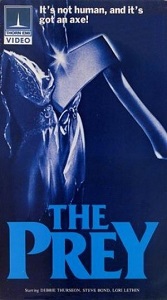 Shot anytime between 1978 and its eventual release in 1984, it’s difficult to call this just another Friday the 13th rip-off if it possibly came before that.

Either way, The Prey follows six ‘teenagers’ on a camping trip deep into the forest where some bad shit went down years earlier, in this instance a huge fire that burnt a load of gypsies to ash.

Naturally, one of them survived and it is he who hunts the group. The freakishly tall loon (played by the original Lurch from The Addams Family) throttles, crushes, and throws his victims to their dull, bloodless demises (the tagline is not to be believed) after mucho campfire and nature footage. 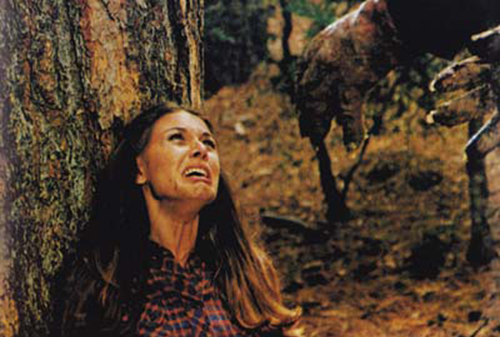 Notable for its rather grim ending, The Prey isn’t terrible, just a bit primitive in its approach, which actually complements the campfire-tale quality of it all and has a likeable final girl in Thureson. It plays kinda like a very early demo of Wrong Turn.

Most versions clock in at around 80 minutes, but lucky Europe, we got those extra 12 minutes of trees n’ shit.

Blurbs-of-interest: Lori Lethin was later in both Bloody Birthday and Return to Horror High.