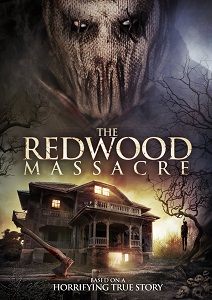 Laughter Lines: “Maybe we took a wrong turn or something?”

It feels like the last ten slasher films I saw all started with a girl stumbling through the woods at night accosted by a hulking killer. Admittedly I roll my eyes, wondering if we’re also heading for some girl-on-girl and asshole characters.

Twenty years ago – never 19, never 21 – a farmer heard a voice from his scarecrow telling him to chop up his family. He listened, then offed himself. We don’t learn his name, but I don’t think it was Marz. Legend has it that his son, one of the victims, still haunts the Scottish woodland around the area. Why? Dunno. How? Shrug. I’m not sure it was ever explained. Either way, each anniversary attracts hordes of teens to the remote area for ‘the party of the year’. 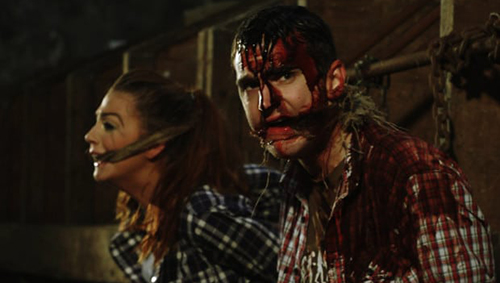 This time, gal-pals Pamela and Jessica rock up for a camping weekend with the latter’s ex, Mark, and his high-maintenance girlfriend Kirsty. Their other friend Bruce is supposed to come too but fails to show up. Hmm… After a few other schmucks are sliced and diced by the scarecrow-masked wacko, Pamela and Kirsty awake to find their friends absent, their phones unable to find signal, and so set out to find them, which leads them to the abandoned Redwood Farm, scene of the murders.

Campers are axed, hacked, sickled, and have the old hand-pulls-out-insides gag happen to them. The Redwood Massacre revels in its sticky bloodletting a wee bit too much, allowing other considerations to slide somewhat. One character appears with a whole backstory, but is never allotted a name, claiming to be out for a revenge for the death of his daughter, then when the killer arrives tells him he’s not afraid to die and so…just does.

Cliched dialogue and characters who pretty much hang around waiting to die (check out the flashback moment where the girl just lies in place despite having several seconds in which she could flee) are at least buoyed by a good score, sharp and impressive photography, and an almost Wolf Creeky sense of being lost beyond help once we’re down to the last respiring individual, all of which gives the film a fair leg-up from its shortfalls. It’s also Scottish, which means it’s full of sexy accents.