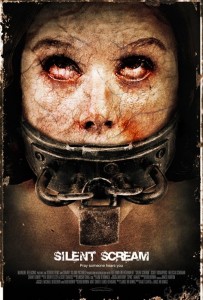 “When the hood appears…friends disappear!”

Look! One of the directors names has ‘can’t’ in it! That’s strange…isn’t it?

In another handsome looking but horribly scripted video slashfest, dim-witted psyche majors celebrate the end of their course with a weekend at their professor’s isolated cabin in snowy Michigan, where they are stalked and slain by a Parka-clad maniac who should probably pay damages to the fiend from Urban Legend.

In a structural anomaly, half of the class travel up on one night and all but two are killed in the first twenty minutes. The rest of them drive up the next day to meet an identical fate, albeit drawn out for the remainder of the running time. High body count notwithstanding, the film drags along at painfully drab rate with acting so dire it makes Eldorado look like a Stanislavsky masterclass.

Too much time is wasted on the dreadful dialogue between are-they/aren’t-they couple Nicole and Mark, who, unfortunately, are the nominal leads. Both of them amass zero sympathy; he intended to cheat on her with two sexy classmates, while she is in an unrelenting bad mood, which would likely make any guy want to skip off for the chance of a menage a trois. However, even during the chase scenes they pause to discuss getting back together.

This travesty of Horror 101 accounted for, The Retreat looks like it was written by a couple of twelve-year-olds who’ve just seen their first Friday the 13th movie and think they can do better by chucking in ‘inventive’ deaths (that were evidently too expensive to be shown on screen), pointless girl-on-girl action, that stupid fucking twist, and somehow been lucky enough to land a competent photographer to make it look a thousand times better than it has a right to and a cover designer who probably never watched it and decided it sounded enough like Saw to provide rip-off art.

If you happen across this, beat your own retreat!

Blurb-of-interest: Melissa Schuman (moody cow) was in The Hollow.

tagged with get your own ideas!, Nu-di-ty, slasher, weird-ass twist, who finances this crap!?