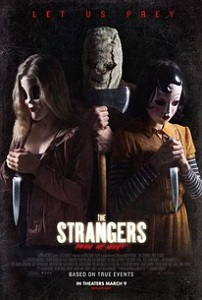 THE STRANGERS: PREY AT NIGHT

Spoilers ahoy. I wasn’t that hyped over The Strangers in 2008, having already seen the far superior Them. It’s still a decent film, with some good creepy visuals, but re-watching it recently it felt like it was treading water for the most of its running time, with an unrelenting hard-on for shots of characters in the foreground, entirely unaware of the masked fiend quietly stalking them over their shoulder.

After a decade-long wait, the sequel came along dripping with the recent trend for 80s nostalgia, as a trailer blasting Tiffany’s iconic I Think We’re Alone Now warned us. Sadly, the song is swapped out in the end for Air Supply’s almost as awesome Making Love Out of Nothin’ at All. Elsewhere, there’s death to the sounds of Kim Wilde and Bonnie Tyler. Seemingly the strangers’ preferred radio station is Magic FM.

A family road-tripping their way to transport wayward teen daughter, Kinsey, to boarding school after a series of infractions stop off at the trailer park owned by a relative for the night. There’s no sign of Uncle Marv and, as summer is over, the place is empty …but then there’s a knock at the door.

Prey at Night wastes little time in getting to the horror, trashing the slow-burn and prolonged menace and stalking scenes, instead just getting on with the killing. Before long it’s up to Kinsey and her all-American baseball lovin’ big-bro Luke to make a stand.

There are some great scenes: Skylight escape and swimming pool fight ranking as the best, and assumed plans for The Strangers 3 are surely scuppered with the siblings’ successful counter strikes, proving fatal in moments that made me holler “YES!!!” as the masked fiends get a taste of their own medicine.

The film was divisive, with some bemoaning it’s side-step from home invasion to out-and-out slasher, but the first movie had little repeat-viewing quality for me, given that the hair-raising scenes are all it trades on, and once you know it’s got a downbeat ending, why bother riding that carousel again?

The inescapable tropes of slasherdom mean that we get the slightly annoying indestructible killer scenes (and a sequence borrowing heavily from a certain Texan film), and it took me a while to warm up to Kinsey as the final girl figure, but she gets there by the time she’s been fed through the shredder a few times.

Prospects for The Strangers 3: We *HEART* the 90s with a La Bouche and Haddaway soundtrack? Not good, but I’d definitely be up for another one of this calibre.