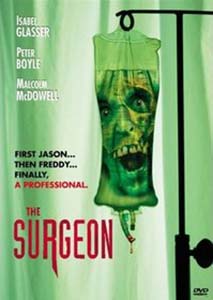 What a cast! How could it go wrong? It can’t …right?

A doctor secretly working on a breakthrough serum that would end physical suffering is fired for his experiments on the patients, goes mad, and returns to take revenge on the people responsible for shutting him down. It’s up to nosy docs Glasser and Remar to put a stop to the carnage before it’s too late.

Not too much going on in the way of thrills and there’s precious little slashing to be seen, plus the killer’s identity is revealed too soon into the movie, robbing it of a possible extra twist – and so we’re left with a slick but standardised medical thriller, the only original remaining plot feature of which is the killer’s ability to overcome his injuries by injecting himself with his own serum thus making him invincible. There’s also full frontal male nudity, courtesy of Dexter’s dad Remar.

As far as hospital slashers go, Cold Prey II and Halloween II are yet to be beat.

Blurbs-of-interest: McDowell later played Dr Loomis in Rob Zombie’s Halloween re-thingies, was also the sheriff in Silent Night and a weird neighbour in Mischief Night; Walter Olkewicz was in Milo.

tagged with before they were famous, grrr men!, Nu-di-ty, slasher