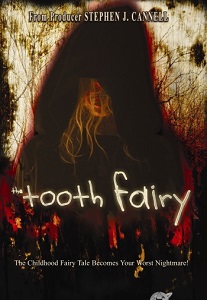 Laughter Lines: “Mark my words – all who stay WILL DIE!”

A strange, but endearing alternate take on The Tooth Fairy as a children-hunting killer in the wake of Darkness Falls, which was an unprecedented success with its PG-13 rating. It should be therefore no surprise that a gored-up knock-off would appear soon after.

In 1949, a couple of boys visit an old house where an alleged witch lives. She knows when you’ll lose your baby teeth and offers gifts in exchange for them. With the promise of a shiny new bike, one of the boys enters the house but sees the hag’s face and is chopped up for his trouble, with the other boy legging it.

Fifty-seven years later – yay! not ten or twenty for once – ex-city doc Peter (Munro) has bought the same house and is renovating it into a country inn. For the weekend arrives girlfriend Darcy (West, who may well have been cast for her likeness to Emma Caulfield), and her 10-year-old daughter Pam, who quickly befriends the ghost of a local girl, who fills her in on the legend. On the way back from this, Pam falls off her bike and knocks her final baby tooth out! Gasp. 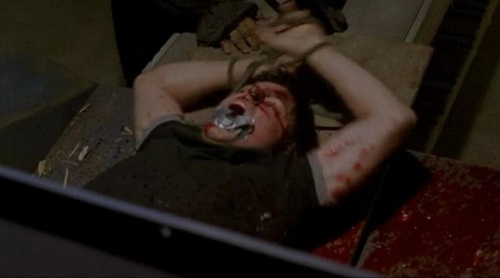 While Peter and Darcy battle a couple of hicks in town, Pam becomes convinced The Tooth Fairy is after her – fueled by P.J. Soles as the requisite neighbour in a cloak who tells them they’ll all die, initially in an Irish accent that soon fades into generic American twang. Nevertheless, a series of gooey deaths ensue as promised: The hunky help is fed into a woodchipper, a kooky psychic is nail-gunned to a wall, a dick is sliced off, decapitation… This is anything but the off-camera kills of Darkness Falls. In truth, it probably has more in common with the same year’s Fingerprints.

Where The Tooth Fairy succeeds is in its slightly more invested characterisations and subsequent dialogue: Peter’s old buddy rocks up with his aura-sensing girlfriend, who utters awesome things like “a transcendent evil has been awakened in this house,” and “your personal landscape is a manuscript written by your actions – when you fight you always lose more than you redeem.” Munoz impresses as the pre-teen heroine, although exchanges between the child actors are sometimes clunky, the Are You Afraid of the Dark-stylings are more enabling in this case. 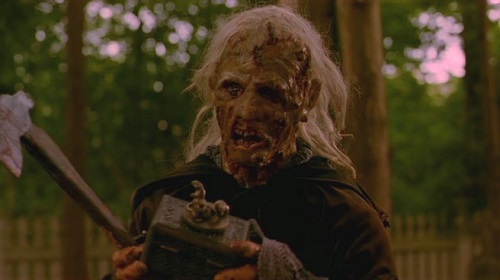 Things become slightly undone as the final edges towards its finale, with ridiculous decision-making shoehorned in to up the body count, undermining the good work done at the start. It’s all forgivable though, given the effort clearly put in by the filmmakers to create something with characters we don’t instantly hate.

Blurbs-of-interest: Lochlyn Munro was in Hack!, Scary Movie, Initiation, Freddy vs Jason, along with Jesse Hutch; Nicole Munoz was in Scarecrow (2013); P.J. Soles was Lynda in Halloween, and can also be seen in Innocent Prey and Uncle Sam; Ben Cotton was in Harper’s Island, Scar, and Stan Helsing; Chuck Bowman previously directed Dead Above Ground.

tagged with get your own ideas!, gore o'clock, Nu-di-ty, rip-off central, slasher