‘Based on True Events’ is, for Once …True! 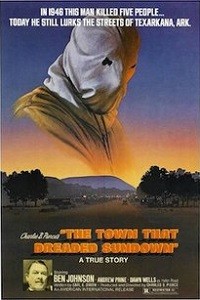 “In 1946 this man killed five people… Today he still lurks the streets of Texarkana, Arkansas.”

Laughter Lines: “This man is definitely a sadist.”

There’s a fair whack of horror movies that claim they’re based on true events, whether that be Psycho and The Texas Chain Saw Massacre borrowing from the crimes of Ed Gein, Wolf Creek incorporating elements of a 90s serial killer case, or every other ghost story being a retelling of the story, few of us actually buy into these claims with much faith. Well, I hope we don’t anyway.

The Town That Dreaded Sundown serves as an anomaly to this rule, being presented as more of a drama-documentary telling the tale of the Texarkana Moonlight Murders, a season of attacks that plagued the town, notably built on both sides of the Texas/Arkansas state line, leading to much jurisdiction entanglement when the case was investigated in the mid-1940s. The tagline might be a stretch though, doubt the guy hung around and just LOL’d at the town for another thirty years.

Filmed before the likes of Friday the 13th and Halloween popularised the stalking of sexy teens looking for some space away from adult supervision to hook up, it’s a plausible theory that slasher films themselves owe something to these crimes, rather than the usual counter accusations: A sack-masked loon, not looking dissimilar to Jason’s first outing, preys chiefly on young folks parking. 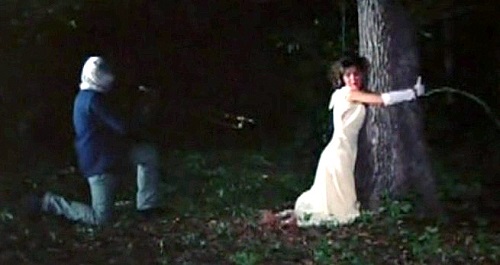 Yeah, most of the victims are shot Zodiac-style, but there’s a truly unique scene in which a prom-goer is bound to a tree while the killer stabs them with a knife duct-taped to the end of a trombone, through which he practices his scales, knifing the poor girl as he goes.

Most of the film, however, revolves around the concerns of the police forces and their attempts to track the killer. Some obscure comedy inserts from an inept patrolman – played by director, Pierce – tank the tension, and the Robert Stack-style narration is weird in a post-millennial world, but this makes for an interesting sort-of-slasher movie, even if you just see it the once.

tagged with a time before Halloween, slasher, true story bro