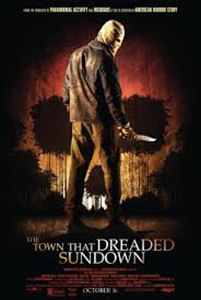 Who remembers Blair Witch 2: Book of Shadows? Anyone? No? OK, so it was critically slain and sank without a trace, but that was one sequel that picked a particularly smart way of being a sequel without actually being one. Sorta.

Instead of sending more teens into the woods to be messed with, Book of Shadows was set in a world where the phenomenon of the movie, The Blair Witch Project, was observed. It was once-removed and so was able to comment on the 1999 film as a film rather than events true to the world of the sequel.

This is also the tack of this not-remake of 1976 creepy-sleeper of the same name, which is a true story concerning one undetected masked killer who did away with five people in the small Texas/Arkansas border town of (imaginatively named) Texarkana in 1946. Sixty-seven years after the murders, the thirty-seven-year-old slasher flick is shown in the town on Halloween. At said event is shy Jami, whose jock-date Corey agrees to go someplace else when it becomes clear she’s not enjoying it. 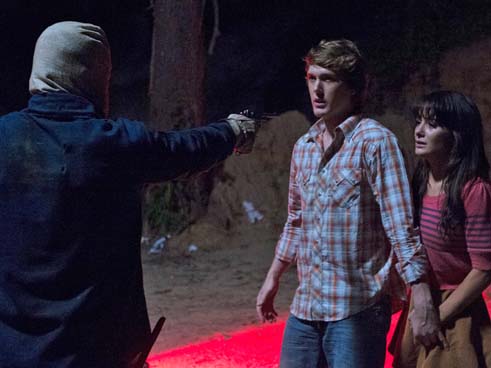 Unfortunately for them, their little private party in a lovers lane is crashed by a hooded killer who orders them out of the car at gunpoint and knifes poor Corey to death, allowing Jami to escape on the condition she tells “them” it’s all for Mary. The town goes into shock at the copycat murder and it’s not long before a second couple are attacked, this time both are slain, and the paranoia of the 40s makes an unwelcome return to Texarkana.

Meanwhile, Jami, intrigued by the killer’s message to her, begins conducting research into the murders of the 40s and who the killer might’ve been. Police forces from both sides of the town attempt to cooperate, shadowing Jami’s every movement. She finds an unlikely ally in old classmate Nick, with whom she pays a visit to the son of the director of the 1976 film (inhale!), who believes he knows who the original killer was… 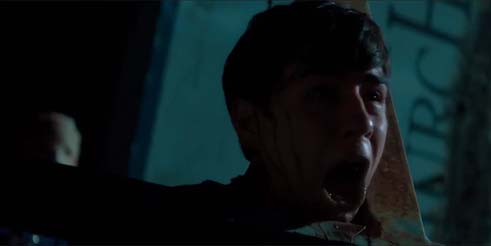 Interspersed with clips from the old film, Sundown 2014 is more of a slasher flick, albeit set over a period of months rather than days, but as the killer has gone to school on the movie, the infamous trombone scene is recreated in a gruesome murder of two bi-curious boys (producer Ryan Murphy’s presence in force), and there’s a bleakly realised mass-shooting at a gas station.

Considering the identity of the real killer has never been resolved, it’s strange that here everything is quite neatly wrapped up. In this sense, and the fact that there was so much story to wade through, The Town That Dreaded Sundown would have made a really good miniseries. There’s a lot to cram into 86 minutes: Jami’s black past, her grandmother’s (the always adorable Veronica Cartwright) hinky demeanor – is she keeping secrets??? – a budding romance between the teen leads, police forces from neighbouring states, and the duo mysteries of who the killers were and are. 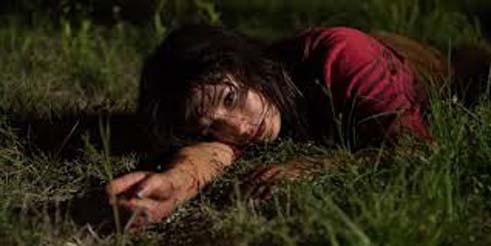 Thus, it’s never boring, not for a second. And that cast!! Cartwright! Cole! Anderson! O’Hare! Leonard! Herrmann! Again, they would be even more excellent if only there was more time.

The production is handsome, far more sophisticated on a visual level than most other contemporary slasher films, and really brings the Americana of the locale to the forefront, with particular attention to accents and attitudes. Aguirre-Sacasa has made a beautiful looking horror movie, a rare beast if ever there was, and, typically, one that bypassed a theatrical release completely. 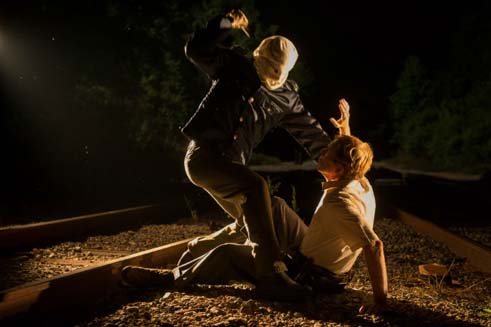 Blurbs-of-interest: Ryan Murphy later created the TV series Scream Queens; Danielle Harris has a cameo role as ‘Townsperson #2′ but be damned if I could spot her!; Gary Cole was also in Cry_Wolf; Anthony Anderson was in Urban Legends: Final Cut and Scream 4; Edward Herrmann was in Death Valley; Josh Leonard – of The Blair Witch Project - was in Hatchet and Madhouse.