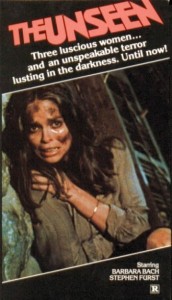 “Three luscious women… and an unspeakable terror lusting in the darkness. Until now!”

One of the more sedate early-cycle films puts super-pretty TV reporter (and former Bond girl) Bach and her two female assistants far away from their Los Angeles base and in some random small town to do a story on a local Danish festival.

When their hotel reservations are lost and there’s nowhere else to stay, they end up at the creepy whitewood home of jovial museum curator Lassick. Of course, no creepy old house in a small American town comes without a shocking secret. Or not so shocking in this case. Lassick hides a mutated, retarded son in the basement – the product of an incestual relationship with drippy sister Goldoni.

Junior playfully kills the companions by dragging them into floor grids and so, to cover up, Lassick decides to throw Bach to him when she later returns to the house. 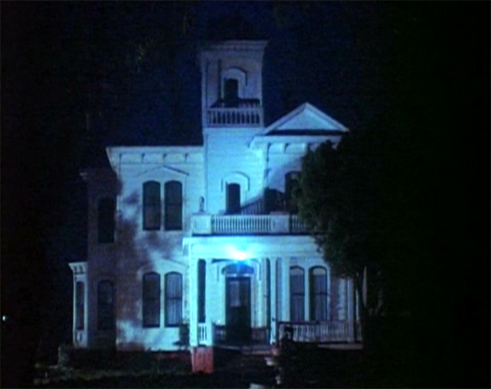 Exhilarating as this sounds, this ‘climactic sequence’ begins just past the halfway point of the film and thus seems to go on FOREVEEEEEEER until the grotesque family finally attack each other and Bach is rescued by her abusive, ex-footballer boyfriend.

The Hitchcock-aping camera work is fairly impressive for the small budget and the always likeable Lassick gets to chew things up when he finally turns nasty but you just get the feeling that it all could’ve been done to much greater effect in a fifty-minute episode of The Twilight Zone and, in terms of girls-in-peril-in-spooky-old-house slasher films, Unhinged does it better.