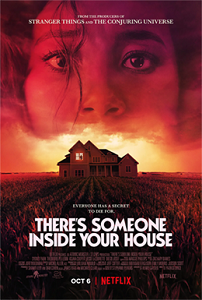 THERE’S SOMEONE INSIDE YOUR HOUSE

“Everyone has a secret to die for.”

Stephanie Perkins’ 2017 YA novel is adapted to film for Netflix as slasher movies become slightly relevant again on the eve of Halloween Kills‘ theatrical release and the incoming fifth Scream movie. It went through a lot of changes from book to film, so some spoilers follow.

Cookie cutter midwestern small town football star Jackson returns to his farmhouse home where nobody is home, finds a ticking egg-timer in the kitchen, ignores it and goes to bed for some rest ahead of a big game. He’s woken by the egg-timer going off next to his head a few hours later and discovers he’s not alone, his truck is gone, and there are photos all over the house showing him beating the crap out of some kid. He’s eventually coerced into a walk-in closet where a hooded killer wearing a mask of Jackson’s face swiftly dispatches him. Shortly before his memorial service, prissy class president Katie is assaulted and killed at the church, a recording of her racist podcast playing in the background.

Transfer student Makani Young (Park, who is great) and her new friends muse on who could be doing it. They casually suspect class misfit Ollie but break the town curfew for a secret party at rich kid Zach’s house, where everyone is coming clean about their pasts to remove themselves from the killer’s hitlist, not a far cry from the Pop Your Cherry party of Cherry Falls. We know from her slowly revealing flashbacks that Makani has something she’s hiding from people, but tonight the killer sets his sights on another friend with a dependency issue.

Makani is attacked next, her secret revealed to everyone by text, but it seems pretty much forgotten by the time the townsfolk hop on down to a corn maze where the killer tries to burn everyone alive. It’s down to the group of friends to rescue their classmates and confront the killer.

Unlike the book, where the killer was revealed uncharacteristically early for one of these tales, they remain a mystery element until the final scenes. The character is different and their motive muddled and confusing, rather than the unsettling rationale of the loon in the book, who just didn’t want other people to have the opportunity to leave the town if he couldn’t get out either.

This change results in the victims going from innocent achievers to the too often featured asshole types the audience won’t care about at all. They’d committed no wrong in the book, which further elevated Makani’s criminal past as worthy of attention. Here, it’s almost taken for granted, whereas the original idea set to imprison the disillusioned teen contingent in lives that go nowhere.

Additionally, the best part of the book – and very meaning of the title! – was the way the killer toyed with the victims’ habitations, which is only recreated during the first murder and Makani’s first encounter with the killer here.

Still, the characterisations of the leads are nicely done, the killer’s identity not too simple to solve, and the early murder set pieces are gruesome and charged with energy.

tagged with I know whatcha did!, slasher, spunky final girl