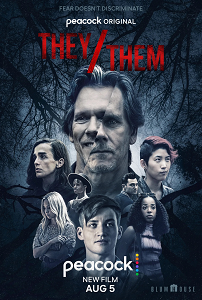 Laughter Lines: “I keep expecting Jason Voorhees to come out of these woods.” / “Who?”

A lone female gets a flat on a backroad and is attacked by a masked psycho. Same old, same old. The aerial shot pans onward and shows us Whistler Camp, a conversion center for non-heterosexual teenagers, a busload of which arrives in the morning to be greeted by head counsellor Kevin Bacon, in a nice throwback to his never-actually-got-to-do-the-job role of Jack in Friday the 13th.

An assorted group of campers are initially divvied up by gender, which is an issue for non-binary Jordan, who is sweet-talked by KB into the boys’ cabin, and later joined by transgender Alex, who is turfed out of the girls’ block when one of the creepy staff spies on her in the shower.

Therapy sessions ensue, both in group and with creepy ‘doctor’ Cora (Carrie Preston, who is perfectly unhinged), the girls bake pies, the boys learn to shoot, hook-ups occur and, after what feels like forever, the masked loon reappears and offs an ancillary staff member. Shortly after, the camp’s thinly-veiled sadistic practices begin to show through. The kids decide they want out, and the killer starts to up their game.

As a slasher movie, They/Them (‘They-slash-them’, geddit?) is a bit of a spectacular failure. The killer is obvious from the moment they’re introduced, and their intent to ‘cleanse’ the camp from continuing to do the damage it does, while admirable, renders them largely unthreatening as the campers are off the hit-list, with only the rather one-dimensional counsellors at risk of being slashed to neatly trimmed ribbons. And they’re hypocritical assholes as it is, so why even care?

The more relative horror in They/Them comes from the invasive in-roads made by the staff to assault their charges: Cora goes through personal belongings to play psychological games with Jordan, all but telling them to kill themself during a session, and the boys are forced to shoot the camp’s ailing hound dog to make them ‘real’ men. It’s disturbing, nicely realised (especially Preston’s leave-the-rest-in-the-dust performance), and sad when you think that such places exist.

The film was hailed as an LGBTQ+ empowerment tale in some places, which makes for some sweet moments between the characters, as they realise their support network is each other, although at times it feels forced within the span of the film and paves the way for a bizarre sing-a-long to Pink’s Fuckin’ Perfect, and some cringe-inducing Drag Race dialogue (I really do not need to hear “Step your pussy up” uttered anymore). It’s as if Logan becomes entangled in the hanging streamers of his plot strands, swinging dangerously close to celebratory musical mode, over to drama, then remembering he’s got a horror film to deliver, so cramming all of the slashing into what little time remains on the clock.

It was probably a commercially wise decision to render the camp a religion-free zone, but, like the lack of threat posed to the campers, is something of a cop out. The persecution of gay folks is largely rooted in such beliefs and it would’ve been brave to call that out, but I can also see why Peacock didn’t want to go down that route given how extreme fundamentalists would probably mail them explosives with ‘groomers’ written all over it.

A tendency to fall back on to slightly stereotypical character attributes and repressed self-loathing means that I can’t wholeheartedly recommend this one, but it’s also hardly the train wreck it’s been made out to be. Probably would have worked better as a miniseries. HellBent needn’t worry about losing it’s gay-slasher crown just yet.

Blurbs-of-interest: Bacon was also the lead in Hollow Man.