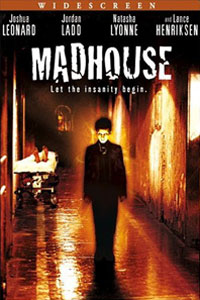 Dire-logue: “Funny that you’d ask a madman if he’s seen anything unusual.”

Joshua Leonard – one of the three students last seen running away from the Blair Witch – is an intern at Cunningham Hall Sanatorium, where he finds himself in the midst of bizarre goings-on concerning a strange boy nobody else seems to see and a savage killer who has it in for the staff. With the help of perky Sara (Jordan Ladd), he tries to piece together a years-old mystery.

A moody, kinetic sleeper directed by Friday the 13th alumnus William Butler (the doomed birthday boy who never reached the party in Part VII) pits a great cast against the depressing backdrop of the aged institution, with impressive results before losing its way towards the final act, where it can’t seem to decide if it wants to be a straight up slasher flick or a ghost story with Grudge-like aspirations.

The major transgression here is the under use of Natasha Lyonne as a patient who claims she’s being haunted by a ghost who may or may not be important to waht’s going on. But this, and several other subplots, are swept aside by the time the axe-slinging climax begins.

Good supporting performances from Jordan (who meets a particularly grizzly end), Darbo, and Henriksen (as the questionable overseer of operations) keep Madhouse‘s head above water and away from the reaches of lesser efforts; it has more in common with Session 9 than it does D-Tox, put it like that. Butler could prove to be an untapped resource for innovative horror.

Blurbs-of-interest: Leonard and Darbo were both in Hatchet; Henriksen was in The Horror Show, Color of Night, and Scream 3; Jordan was in Jason Goes to Hell; Ladd was in Club Dread.

tagged with after they were famous, Friday the 13th, slasher, star power