More of those loveable title cards, this time from some of the series we love the most. And maybe not so much. 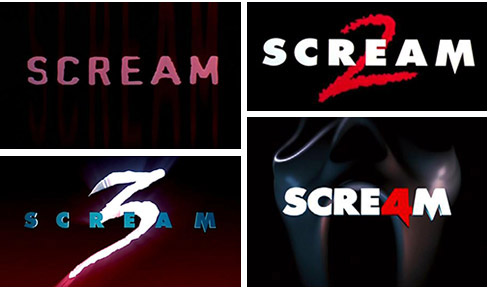 THE slasher franchise of the 90s (and also 2011), Scream fell into a consistent fontage after the first movie (which oddly had the regular typeface on all the artwork), in 2 and 3, the part number was slashed across the screen after the initial double murder which kicks off each and every film and, in the 4th, it kind of morphs out of the ‘A’ – thus the film is really called Scre4m, which is stupid, but at least we haven’t yet have 5cream… 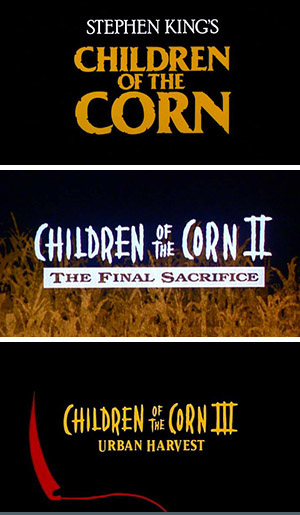 Stephen King probably hasn’t bothered watching most of the Corn sequels (maybe that horrendous 2009 remake). Where are parts IV thru eight? On VHS or not owned at all. I don’t like III but it came in the box with the first two. What to say? Hmm… nothing much really. They’re quite dull, aren’t they? 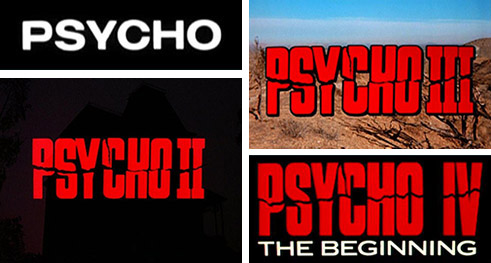 The original slasher movie, Psycho‘s shrieking-string opening credits end with the title card cracking up as per the sequels we see here, albeit in 1960-era editing simplicity. The ‘cracked up’ (oooh, clever!) logo remained unchanged all the way up to the 1990 final entry in the cannon, shortly before Anthony Perkins’ death.

Despite being one of the more memorable body count franchises, Final Destination has always been a bit of a flawed title concept. Yes, it works with the plane crash-centered first one, but can there be more than one ‘final’ destination? Turns out, yes. And even when they tried to end it by sticking a giant ‘THE’ in front of it, the sequels kept coming… 3‘s tarot cards only serve to remind me that none of the idiots in any of these movies have ever consulted a psychic, and 5 looks a bit boring here, though a second later is explodes, like, totally in 3D!

What have we learned from this batch? That some franchises are better managed in terms of their brand continuity than others. But nothing else.